The story revolves around main character Kyhra as she uncovers the mysteries of a sinister monolith that has suddenly appeared, threatening the very existence of her world. Along the way, she encounters incredibly powerful bosses, enigmatic ghosts, and secrets left behind by previous explorers.

Scourgebringer’s gameplay draws its inspiration from Metroidvania and action games of old, and the developers seek to combine that sense of mystery and danger with fluid controls and aerial combat.

However, it’s not a traditional Metroidvania in the sense that Metroidvanias require backtracking with newfound powers. Scourgebringer is all about moving forward and finding alternative routes to do so. The environments Kyhra must explore are pre-built around specific challenges and presented in a procedural style. 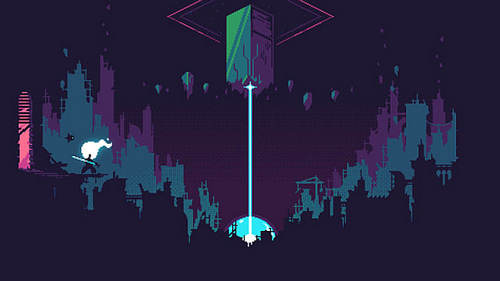 Joonas Turner, of Nuclear Throneand Tormentor X Punisher fame, is creating the game’s soundtrack, which Flying Oaks and Dear Villagers say will be one of the game’s major strengths.

Flying Oaks’ Thomas Altenburger said the game has been in development for only a few months, but the process is completely open. That means the team shares progress and even budgets with players, incorporating the feedback they receive in the process.

There’s certainly been no shortage of roguelites and Metroidvanias in recent years. However, Dear Villagers’s involvement suggests players have something unique to look forward to with Scourgebringer.

The publisher began a few years ago under the name Playdius, but Guillaume Jamet, head of publishing, said Playdius overextended itself with too broad a focus, harming its branding in the process.

The company rebranded as Dear Villagers and plans to narrow its focus on meaningful, mid and hardcore games for PC audiences. Specifically, their goal is working with «indie games that reach for higher, maybe AA-style games. What we’re looking for right now are games with very nice visuals, something visually astonishing, and great gameplay with a twist.»

Those looking forward to playing such a game might have a bit to wait, since Flying Oak hasn’t mentioned an anticipated release date. However, more information on the game’s progress can be found via Flying Oak Games on Twitter.