There are a lot of super-smart systems and ideas in Apex Legends that improve on the overall battle royale genre. The inventory system makes it easy to navigate the many weapons in the game, the respawn system makes it possible for smart, brave, and lucky teams to save their teammates from the great beyond, and the Legend system gives everyone on a team a specific set of abilities to help out their squad. But the best thing Apex Legends brings to battle royale is its ping system, which allows players an extremely effective way to communicate even without actually speaking to each other.

The ping system makes team communication in Apex incredibly easy and fluid, whether you’re playing with friends or with random people you squad up with. You can mark enemy locations, suggest where the team should go, and point out weapons and attachments your teammates might need. Having those markers show up in-game makes it easy to get your point across to other players, and in some cases, is even more effective than actually talking to your team. It’s also highly accessible to players who might not otherwise have the means or ability to speak to teammates.

Others have taken notice of how useful Apex Legends’ ping system is. Epic Games introduced a similar system to Fortnite in the game’s latest update, making it a little easier for squads to talk to each other in the game. That might be considered an acknowledgment of how popular Apex has become in just a few weeks since its release, as well as how intelligent and useful the system can be.

Fortnite isn’t the only game that should take a page from Apex’s communication capabilities. Another recently released Electronic Arts game could greatly benefit from implementing something similar: Anthem. In fact, BioWare could seriously improve many of Anthem’s problems immediately by adding a ping system of its own. It’s actually something that should become standard in the shared-world shooter genre. 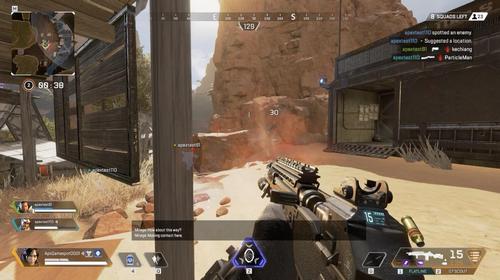 BioWare means for Anthem to be a squad-based shooter in which players are constantly working together to beat hordes of enemies. There’s more to it than just shooting: Anthem has four classes of its javelin mech suits you can choose from when you start a mission, and each has its own special capabilities. Using your abilities in concert with other players can create combos that do extra damage, inflict status effects on enemies, and give you special bonuses like dealing extra damage or spreading those effects to even more bad guys. Especially at high levels, combos and team coordination are pretty important.

But like most shared-world shooters, such as Destiny 2 or The Division 2, it’s very easy to go through most or even all of Anthem without talking to anybody. The game supports matchmaking all the way through it, which means you can drop into any mission with a group of three other randoms. And anybody who’s spent even a few minutes in a game like this knows that almost nobody talks to each other. Like most online games, chats are often filled with annoying or even toxic people, so even those players interested in actually cooperating usually remain silent. If you’re not in a party chat with other players, chances are, you’re not communicating with them—especially since Anthem offers no text chat. Your only options are voice and a few character emotes.

That’s annoying in most cooperative shooters, but it’s especially problematic in Anthem. You can play BioWare’s shooter solo, but that’s not the way it was designed or intended. Play with other people you don’t know, however, and it feels like you’re just blasting away at things without any real organization between you and your teammates. It’s even worse in those missions when Anthem expects you to solve a puzzle. Nobody talks, nobody knows what anyone else is doing, and everyone just floats around trying different things until, seemingly, someone has the good sense to look up the solution online and input it.

It’s not hard to imagine how Apex’s ping system would instantly mitigate all of these issues in Anthem, and make it a much more fun and cooperative game besides. Even just the ability to call out and mark enemies or call out locations for combos would go a long way. Anthem’s combos require a Primer ability, which sets up the combo, and a Detonator ability, which triggers it; a ping system would make it very easy to tell your teammates which kind of ability you need and where. Since the javelin class that does the detonating also matters in executing the combo, pings would make it a lot easier to make a plan and execute it. 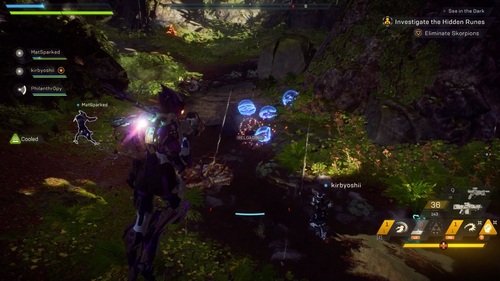 That’s to say nothing of the benefits of being able to ping puzzles to work together on solutions, and its myriad potential uses in Anthem’s freeplay mode, when you can just fly around with some pals getting into trouble and searching for loot out in the world. Marking locations, suggesting destinations, warning teammates about threats or showing them things they should stop and pick up—it all could be easily communicated with a system similar to Apex Legends’.

Respawn Entertainment has created a pretty major and extremely useful innovation for the shooter genre with its ping system, and it’s something that even more games are surely going to emulate. And if the shared-world shooter genre is going to expand, it absolutely should capitalize on this idea. Pings in Destiny 2 or The Division likely would improve them in a lot of the same ways as Anthem could be, and lots of others kinds of games would benefit from similar communication tools. It might be tough to find ways to squeeze a ping button into those games’ current control schemes, but the huge benefits of better communication would be worth reshuffling them.

Now that Apex Legends has cracked the code, imagining a similar game without a smart, easy, highly accessible way to communicate with other players is a little tougher. Games like Anthem that are serious about teamwork and cooperation should implement something similar as soon as possible. The ping system can make teamwork-based games smarter, more accessible, and most importantly, a lot more fun.