The Outer Worlds is the next RPG from Obsidian, and gives one of the most experienced studios in the industry an opportunity to play in a new space-faring setting. If you have some nagging questions about the game, chances are co-directors Tim Cain and Leonard Boyarsky addressed them in a lengthy new Q&A session. 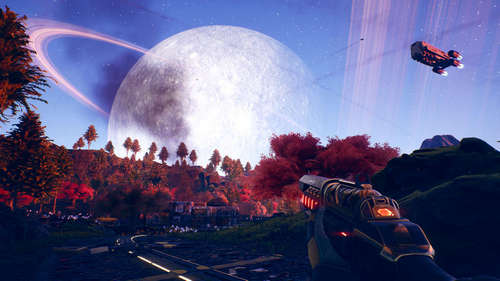 The Game Informer podcast hosted the Q&A with questions from fans. It delves into details from the esoteric to the mundane, with an occasional diversion regarding their history establishing the Fallout franchise. A few choice tidbits include the level cap of 30, and the fact that weapons and armor will have modding but no crafting system.

Some of the most detail comes from implications surrounding the story. The duo say that they saw at least one fan speculate pretty accurately on what’s changed in the alternate timeline the game takes place in, and it may not be what you’d expect. They suggest that one of the key turning points in history was the assassination of President William McKinley in 1901. Without that event, the alternate history speculates, Teddy Roosevelt wouldn’t have taken office and implemented a trust busting agenda. This suggests that Roosevelt failing to break up large corporations is largely responsible for the alternate history presented in The Outer Worlds.

That said, they also note that there is no authoritative codex in the game that outlines exactly what happened. You’ll find documents that give different perspectives, and you can piece together some key parts of the world lore, but there’s no definitive voice to tell you what’s true and what isn’t.

The full show is more than an hour long, and it’s filled with lots of interesting answers and sometimes even more interesting non-answers. The Fallout-like game is one of our most anticipated games of the year.