Bethesda has some big content updates in store for Fallout 76 this year, starting with this month’s Wild Appalachia expansion. That is slated to kick off on March 12 and will introduce some new content to the online RPG, most notably a Brewing and Distilling system, which the developer further has further detailed in its latest Inside the Vault post. 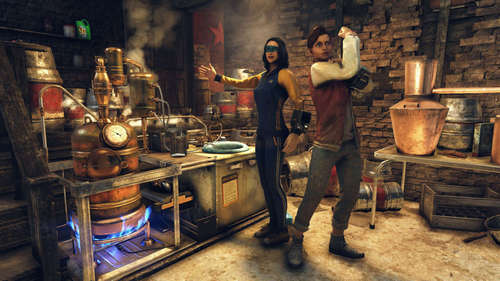 As part of a new quest called Wasted on Nukashine, players will be able to construct a Brewing Station for their CAMP. As you can imagine, the Brewing Station will give you the ability to craft a variety of different alcoholic drinks, from beer to various wines. These will provide a temporary buff when drunk, but Bethesda warns that they will also «bring a drawback and, just like real life, will result in a mild hangover.»

Depending on what type of drink you’re trying to make, you’ll be able to increase their potency by letting them ferment longer. Wines and Spirits in particular will require a longer fermentation time than other drinks, but they can also change from «fresh» to «vintage» if aged long enough, imbuing them with additional properties.

In addition to the Brewing and Distilling system, Wild Appalachia will introduce two new quests over the next several months: Shear Terror and Ever Upwards. The former focuses on mythical monsters, while the latter has you join the Pioneer Scouts and earn merit badges.

In addition to that, Bethesda is holding the limited-time Fasnacht Parade event beginning March 19, which will give players a chance to earn «unique rewards.» The previously teased Survival PvP mode is also slated to arrive on March 26 and will drop all the restrictions around player encounters, making for a much tenser experience.

Why Akuma Should Be In Resident Evil 2 Remake