Challenges for Season 7, Week 9 of Fortnite are now live, and for one of them, you’ll have to embark on a dancing pilgrimage around the island. Specifically, the challenge requires you to locate three key landmarks, hop on top of them and then do a little dance to earn the precious Battle Stars. Those with good knowledge of the map will probably be able to get this done real quick, but if you need a guiding hand, we’re here to offer one. Below you’ll find a breakdown of the challenge, as well as exactly where you should go to complete it.

So, the three landmarks you need to find are a sundial, an oversized cup of coffee, and a giant metal dog head. All there are spread out across the map, so it may be easier to find one, drop out of the game, and then fly out of the Battle Bus to the next and so on. The sundial can be found in the bottom right of the island in the desert area. Head to grid reference G9 and look for a hill north of the gas station. You’ll see a bunch of cars stacked in a very strange way—that’s your sundial.

Next up is the oversized cup of coffee, which you’ll need to drop into grid reference F5 to find. Head to the Dusty Divot diner, specifically the parking lot, and you’ll see the caffeinated beast there. If you’re approaching it from the front, it’s on the left of the car park area. And finally, the giant metal dog head is all the way up in the top left of the island at Junk Junction. Hop over to grid reference B2 and look for the crane on the left of the entrance, which has a little dog face on it. Get to the very top of the crane—the head as it were—and bust a move. Take a look at the map below for a visual representation, and there are also screenshots showing the exact locations. 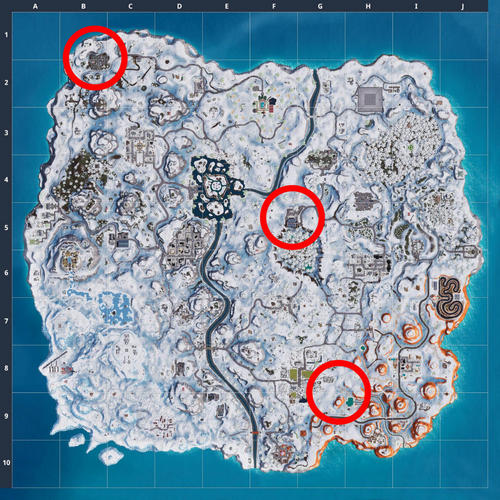 The rest of the challenges for the week are fairly straightforward, and you can get a breakdown of them all here. Of course, the wintry event in Fortnite is ongoing and, as part of that, a new weapon called the Chiller Grenade has been added to the game. It arrived in update 7.30, which also introduced the Solid Gold limited-time mode. You can read about both of those, as well as the various other tweaks and changes, in the full Fortnite update 7.30 patch notes.