Brazilian developer Behold Studios, the minds behind Chroma Squad and The Knights of Pen and Paper, announced its newest project today, Out of Space. A multiplayer simulator, this upcoming title focuses on the small details of life, like keeping the house clean, that can so easily get under the skin, but there’s a twist: it happens to be set in space.

The goal in Out of Space is twofold: stay alive while keeping your space home running smoothly. The latter task involves ordinary daily tasks, such as taking out the trash, keeping things free from dirt, and doing the dishes, but, according to Behold’s Sauolo Camarotti, that’s where things get interesting:

Almost everyone has experienced the frustration of figuring out who’s responsible for all those mundane household tasks. But imagine if you lived in space how much more challenging it would be to even take the dog for a walk.

Along with maintaining your space home, you’ll also be decorating it and making it exactly the way you and your housemates want it to be. Judging from the images Behold provided, there will be a wide range of furnishings to use when doing so, and houses appear fairly large, featuring what looks like an outdoor deck area. 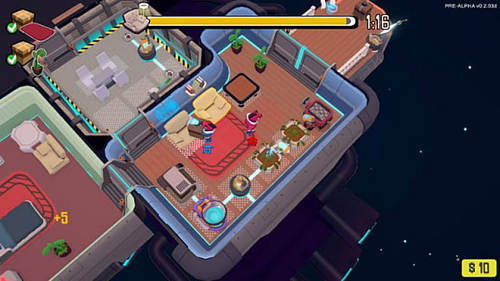 Whether you’ll be able to add rooms during the game remains to be seen, but it seems, just like in real life, you’ll have a budget to work with. Presumably, in future updates and demonstrations, Behold will reveal how players can earn money too.

The other aspect of gameplay involves survival, though Behold wasn’t as detailed on that facet. Alien goo and dirt apparently make their way into your home from time to time and must be dealt with before disaster strikes. There’s also the threat of people turning into alien cocoons.

Out of Space is expected to launch this fall on PC, Mac, Linux, Xbox One, PlayStation 4, and Nintendo Switch with support for multiple languages. While it is focused on co-op play, it will feature a single player mode.