In Devil May Cry 5, you’ll need to up your skills in combat to see some of the game’s most exciting and satisfying moments. Just like in previous games in the series, Capcom’s action game features some hidden secrets to uncover, and they’ll require players to put their skills to the test in order to unlock them. Though in a slight change from past games, which feature post-credits easter eggs at game’s end, Devil May Cry 5’s secret ending can be seen during the opening mission of the game.

In the Prologue, you’ll play as Nero—sans his iconic Devil Bringer. As it’s revealed in the first act of the game, his demonic arm was torn off by a mysterious figure, and he’s been hellbent on exacting revenge ever since. In the state Nero is in during the beginning of the game, the scrappy protagonist isn’t as well-equipped compared to his outing in DMC4, which makes his first major encounter with the all-powerful Urizen a major battle to overcome. This first boss fight is intended to show how powerful this big bad is, and that Nero will need more power to stand a chance. Having said that, it’s actually possible to defeat Urizen in this battle—ending the threat before it even begins to have a major impact. 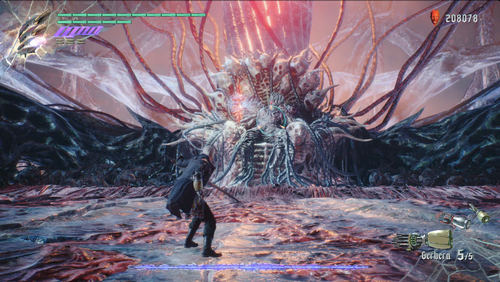 First off, I’d like to stress that unless you’re a highly skilled DMC player that wants to show off, you’re much better off saving this particular fight for when you’ve successfully cleared through the game at least once. It’s not worth doing multiple attempts on this mission right at the beginning. Since you’re free to replay every mission in the game at any time, bringing all of your upgrades and new skills to old missions, it will make for a much more ‘fair’ fight if you come in prepared. As the prologue mission clearly illustrates, Nero is outmatched. But even when you revisit this mission more prepared, you’re still in for a tough fight. If you want to see this ending, it’s recommended you try this fight on the Devil Hunter difficulty.

The key to winning this fight is to keep moving, get in close, and to avoid all of Urizen’s attacks. While that seems like it should go without saying, the demon boss is extremely effective at keeping you at a distance and overwhelming you with attacks—all of which deal heavy damage. You’re essentially fighting a near end-game boss right at the beginning, and he’ll pull out all the stops to take you down, and all without getting up from his throne. In order to strike Urizen directly, you’ll need to destroy the crystal that protects him. This crystal not only shields him from damage, but it also has attacks of its own. Generally speaking, you’ll want to stay as close as possible to him and keep attacking the crystal until it shatters. This will leave Urizen vulnerable for a limited time, allowing you to get some hits in. He’ll regain his posture soon after and conjure up another crystal—repeating the process again.

If you’re able to fend off Urizen’s attacks and go in for the critical blows when he’s vulnerable, then you’ll be treated to a somewhat uneventful, but humorous ending celebrating your feat. You will also gain an achievement/trophy for clearing the tough battle. Though it may not seem worth the effort, it is a particularly interesting fight to brute force your way through, and it’ll be a nice feather in your cap. With that said, a real challenge will be clearing this battle on Dante Must Die mode, DMC5’s hardest difficulty.

For more on Devil May Cry 5, including the locations of all the Secret Missions and how to beat them, and along with our full review of the game.

Mortal Kombat 11 Adds Jade To Its Roster Of Fighters