Beat Games has announced that the first music pack for Beat Saber will be coming out this month. The music pack will also be accompanied by an update that changes the game’s UI. 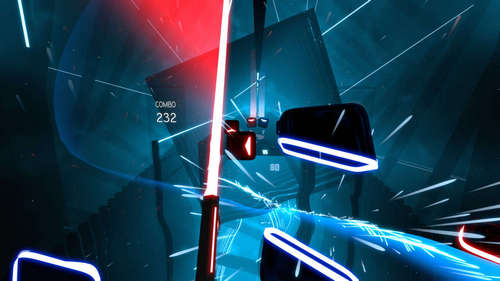 For now, the Beat Saber Music Pack 1 is scheduled to release on March 14. This update includes OST Vol. 1, OST Vol. 2, and Extras, and will go live across both PS4 and PC, so the latter will finally be getting the songs that have previously been exclusive to the former. Beat Games hasn’t yet announced what songs are included in Music Pack 1. However, the developer did reveal what the new UI for the game would look like, and the redesign should help you easily browse through songs in each OST released for this Music Pack and any future ones. The new UI can be seen in the tweet linked below.

🚨 WE HAVE THE DATE! 🚨 Our first Music Pack lands in Beat Saber on March 14th!
See a little sneak peek to our updated UI so you can easily browse OSTs and upcoming Music Packs. pic.twitter.com/GiTLvAdBKG

If you haven’t tried Beat Saber yet, you absolutely should. The game has you swing lightsabers and dodge obstacles to the rhythm of different songs, all while immersed in virtual reality. It’s a pulse-pounding experience that we picked to be one of our top VR games in 2018. Beat Saber is officially out on PSVR, but still in early access on HTC Vive, Oculus Rift, and Windows Mixed Reality. That said, the PC versions of the game support a huge modding community, which has already added dozens—if not hundreds—of additional tracks for you to play.

In our Beat Sabers PSVR review, Alessandro Barbosa gave the game an 8/10, writing, «Beat Saber is an exhilarating rush and an exhausting game to play in the best way. It has great music that is more varied than you might expect, complemented by smartly designed levels that marry their complex patterns perfectly to the beat. It’s difficult to get bored of Beat Saber, especially thanks to its extensive campaign that pushes you to get better with each step up in difficulty. But that same campaign is also uneven at times with confusingly counterintuitive challenges, which might frustrate you to the point of taking a break. And when you do, you’ll realize that Beat Saber is also currently thin on content, with only a handful of songs and no means to upload customs ones. Yet despite those flaws it remains consistently satisfying to play, and is certainly one of the best PSVR games you can buy right now.»