With high-quality Genesis ports aplenty on PC and consoles, the most popular 16-bit Sega games are easier and cheaper to play today than ever. But if simply having access to some of your favorite Genesis games as digital downloads doesn’t meet your personal standards, you can also go beyond and step into the expensive and complex world of vintage gaming with real cartridges and dedicated consoles.

Getting Genesis games is easy enough (budget depending), but picking the right console is a more complicated task than you might realize at first. Until now, your choices were limited to Sega’s classic consoles and cheaply made third-party clones, but even Sega’s own hardware has issues that any serious Genesis fan should consider. From inaccurate audio to video interference, practically every model suffers from its own mix of shortcomings.

This frustrating scenario is why the arrival of the $189 (plus shipping) Mega Sg from Analogue is practically a dream come true for the weary Genesis shopper. It’s not the «perfect» Genesis, but it arguably qualifies as the «best» off-the-shelf Genesis, with a wide variety of useful and entertaining options to play with, and none of the usual issues that commonly plague other consoles. It’s restricted to use on modern flat-screen displays, and won’t work with your Menacer light gun or the 32x add-on, but the level of quality both inside and out more than makes up for these caveats.

The Mega Sg is a Micro USB-powered, region-free Genesis console that connects to your TV via HDMI, supporting multiple resolutions from 480p to 1080p, with an optional 3.5mm analog stereo audio port on the front of the system (similar to the original «Model 1» Genesis.) There are no controllers included in the box, but it supports original controllers and modern alternatives, such as the co-promoted M30 from 8BitDo.

Pop off a door on the side, and the Mega Sg can be connected to both models of Sega CD hardware. It also works with Master System game converters, but to simplify the process Analogue has included a sleek adapter of its own, and will eventually release cartridge adapters for Game Gear, Mark III, Sega MyCard, SG-1000, and SC-3000 games. Traditionally troublesome games, like Sonic and Knuckles (in combination with Sonic 2 or 3), Virtua Racing, and the most popular flash carts, are all supported. And with built-in cheat code functionality, you don’t need to worry about dusting off your Game Genie to tinker with your favorite games.

One of the special features packed into the Mega Sg is Ultracore, a licensed release of a canceled Genesis game formerly known as Hardcore, developed by Digital Illusions (now known as DICE). Despite being ready for release, it was canceled by Psygnosis in 1994 purportedly due to the publisher’s shrinking faith in the Genesis’ popularity. It’s a beautifully animated technical showpiece that packs a challenge, and it’s a shame to think it’s taken 25 years to see the light of day. It’s both an interesting slice of gaming history and a strong pack-in for the Mega Sg.

At the core of the Mega Sg is an FPGA chip (Altera Cyclone V), an increasingly common solution for retro gaming hardware that, when programmed correctly, can accurately mirror the functionality and behavior of original hardware. Analogue employs FPGA engineer Kevin Horton to design its hardware emulation cores, and «Kevtris» (Horton’s popularized handle online) is widely regarded to be the best in the biz. For the Mega Sg, like the Super Nt and Nt Mini before it, Kevtris not only aims to recreate the best possible configuration of original hardware, but to also implement settings that allow you to manipulate various aspects of the audio and video output in ways that no other Genesis console can offer. 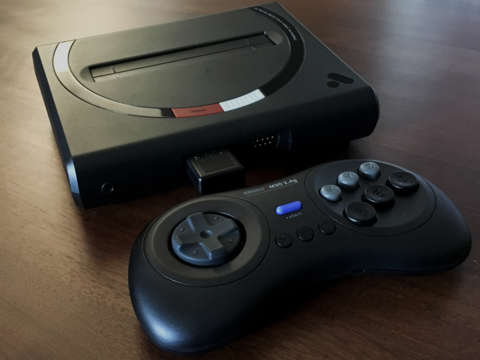 For its clear and authentic sound alone, the Mega Sg is a worthwhile purchase if you take your Genesis experience seriously. The system’s library is home to countless soundtracks and sound effects that deserve nothing less than the best-case hardware configuration, and because the Mega Sg’s FPGA setup replicates the famed Yamaha YM2612 FM Synthesizer from the original system, you don’t have to fear its audio output—something you can’t say for most other Genesis consoles and clones that output harsh, muffled, or distorted audio. There’s a good chance you’ve never heard the original Genesis at its best even if you were following along in the ’90s.

To have an accurate, reliable, and clean sounding Genesis in the Mega Sg solves one of the biggest headaches of shopping for a console. It’s not the only solution, however. Experts in the hobbyist console modding scene have devised solutions of their own to improve the poor audio quality in later Model 1, Model 2, and Model 3 Genesis consoles. When compared to a Triple-Bypass amplified Model 2 Genesis by ear, the Mega Sg sounds like it uses a slightly narrower frequency range—an anecdotal observation, to be sure. The margin seems slim, however, but it’s worth noting that there are other ways to get a great-sounding Genesis if you know where to look and what to do.

In terms of extras, the Mega Sg provides a great variety of audio options. Some are designed to help balance out audio and tune it to your liking, while others exist solely to provide a means of reshaping the sound of Genesis soundtracks and sound effects, if only for the fun of it. The Mega Sg’s audio settings include:

You don’t need to understand all of the above to jump in and start tinkering with the audio to see what happens. You can’t break anything, and it’s easy to reset the Mega Sg’s settings back to their default state if you wind up changing too many options. Having this freedom and control at your fingertips is something that no other Genesis console can offer, elevating the value of the Mega Sg for the knowledgeable and curious user alike. For a more thorough description of the Mega Sg’s various technical settings, you can refer to the official Mega Sg Reference Manual.

On the video side, the Mega Sg gives you control over the following options:

Adjusting the look of the Mega Sg’s video output can be useful, with the most valuable video settings pertaining to adjusting the dimensions and aspect ratio to suit the game and display at hand. You don’t need to change settings every time you switch games, but it’s great to have the option should you feel the need to dial in the «right» settings.

All of this would mean little if the Mega Sg had any issues actually playing games, but put simply, it ran every one of the dozens of Genesis, Sega CD, and Master System games I tested with no obvious flaws. They not only looked gorgeous and sounded awesome, but with essentially no perceptible input lag (be sure to use your TV’s Game mode!), everything played well too. 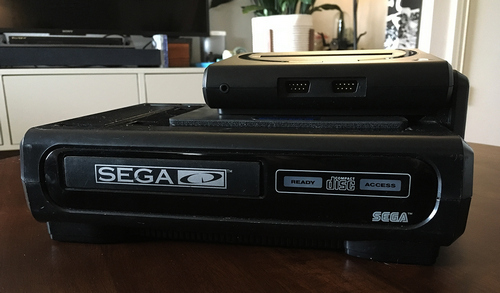 When a Genesis just works as intended, as the Mega Sg does, games take on a new light. With the audio intact and clearly presented, you get a better sense of the nuanced compositions running behind the scenes and suffer none of the infamous crunch and grind that comes from lesser systems. I’ve had a similar experience with my aforementioned Genesis 2, but it took a lot of effort and money to get there. I had to buy a video scaler from overseas (the Open Source Scan Converter), purchase custom SCART cables and PCBs, and ultimately take the risk of modifying my console to install the amplifier mod. It’s an inelegant solution that I enjoyed pursuing, but the Mega Sg is my new preferred way to play Genesis games on a flat-screen display, relegating my souped up Model 2 for use on CRTs.

Having spent so much time describing what the Mega Sg is capable of, it’s worth also mentioning that it is a compact and wonderfully made console. It has heft, is built from solid materials that are pleasing to the touch, and bears an original design that looks like a proper reimagining of Sega’s 16-bit hardware aesthetic. And just in case you’re considering a Mega Sg for its Sega CD support, rest assured that an included mat will support Analogue’s little console and protect your vintage CD unit—though there’s nothing that can account for the conspicuous difference in scale between the two devices.

So while roughly $200 is a lot to spend on a console to play Genesis games, right now, the Mega Sg is the easiest way to get them up and running on a modern TV without sacrificing audio or video quality—the support for Master System and Sega CD games is the icing on the cake. Some people will always prefer to go the route of using emulators, and others may only want to play with original hardware and stick to aftermarket mods. But if you are open to the idea of a third-party Genesis console, and you want the peace of mind knowing that it looks and sounds better than the best original console from Sega, there’s no better option on the market than the Mega Sg.

Borderlands 3 Cross-Play Support Is Being Looked At, Says 2K