Content is planned from April to August and will feature both free and paid DLC with new characters, avatar costumes, events, stages, and more. April will see the game’s first free DLC update. With it comes a Clan feature, a Vertex event, and new avatar costumes. May will feature both free and paid DLC. On the paid side, players will get legendary duelist Seto Kaiba, two unannounced playable characters, and avatar costumes and skills. Players will also get an online link mission, a raid boss event, and the World Tournament stage for the low price of free.

The content roadmap rounds out in August with both free and paid DLC similar to May. Players will be able to purchase three unannounced playable characters and additional avatar costumes and skills. Further, even more avatar costumes and the Valley fo the End stage will be offered to players for free.

Check out the photo below for the full content roadmap. 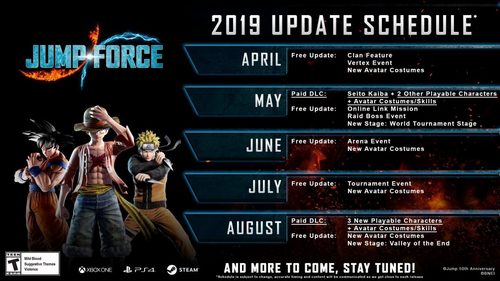 In our Jump Force review, we called it «a worthy celebration of the legacy of Shonen Jump manga, but it honors its source material a little too well with how filler-heavy the middle of its story arc is, saying «there’s ample opportunity to develop new strategies and reach greater feats of combat prowess in online multiplayer.»

Jump Force is available now for PC, PS4, and Xbox One.