Today, WB Games and Pokemon GO developer, Niantic, released the first gameplay of a new mobile AR game based on the Harry Potter franchise. Titled Harry Potter: Wizards Unite, the game places players in the role of a new recruit for the Statute of Secrecy Task Force, and the footage released shows Ron and Boggart, as we all as a dark witch. 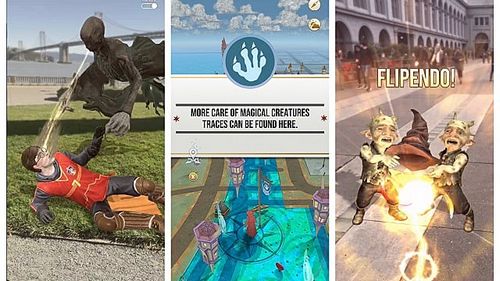 As a new recruit, players will work with other players from all over the world to investigate a major disaster in the wizarding world. As they work together to contain the disaster, players will cast spells and gather artifacts, creatures, people, and memories, known collectively as «Foundables,» returning them to where they belong before the Muggle world finds out about them.

Much like Pokemon GO, Harry Potter: Wizards Unite has Stops called Inns, where players will refill their spell energy and obtain ingredients for potions. They’ll also be able to pick up Portkeys that unlock AR portals to important locations found in the Harry Potter books and movies.

Also similar to Pokemon GO, players will be able to compete against each other using their magical combat skills at Fortresses, the Wizards Unite‘s version of Gyms.

The game is set to release on both iOS and Android devices later this year. Prior to that, Android users can pre-register for the download via Google Play.

Harry Potter: Wizards Unite is Niantic’s third Augmented Reality offering and the second to work with a major IP.  With its original release — Ingress — Niantic set itself apart as a developer of Augmented Reality games.

When the company teamed up with the Pokemon Company to create Pokemon GO, it officially became the go-to-developer for all things mobile AR.

Now, With Harry Potter: Wizards Unite, the company has taken on another massive IP, although time will only tell if Wizards Unite will make the move from highly-anticipated to highly-regarded.

Borderlands 3: First Trailer, Characters, Impressions, And What We Know