Yesterday, THQ Nordic shared the release trailer for its upcoming open-world FPS set in 1980s Sweden. Generation Zero takes players to an alternate version of the Scandinavian country where hostile machines roam the countryside. The game was one of our most-anticipated games of the year.

In Generation Zero, players will defend themselves against these massive robots while [sic] unravelling the mystery of what is really going on.»

This game isn’t just a run-and-gun, however. In order to survive, players will use various tactics to lure, cripple, or destroy enemies. There’s also player choice: take enemies on solo, or coordinate with up to three other players to complete objectives. Those electing to play in co-op will be able to compliment each others skills in combat by «support downed friends … [to] share the loot after an enemy is defeated.» 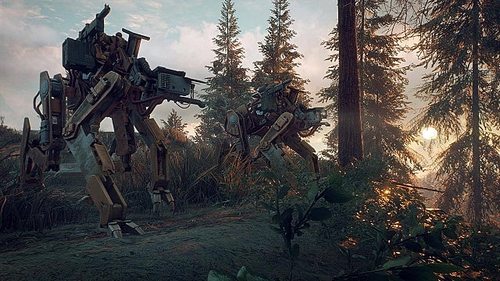 NPC enemies in Generation Zero are persistent, meaning that when a player destroys enemy armor, weapons, or other gear, that damage remains even if the enemy escapes. The next time a player runs across that particular foe, it will still be suffering from that same initial damage.

The interesting thing about this sort of mechanic is that it gives players the option to leave an enemy alive and come back for it when they’re better prepared, rather than having to beat an enemy down all in one go.

On the more techy side of things, players may find it interesting that the game is rendered with the Apex engine, which was created by Avalanche Studios and used in games such as Just Cause 4 and Rage 2. This allows Generation Zero to have a dynamic day/night cycle, unpredictable weather, and, theoretically, complex AI behavior.

And, for the 80s fans among us, particularly where music in involved, Generation Zero features a full 1980s soundtrack. Queue the New Wave now.