Google took its first steps into being a major competitor in video games with the announcement of Stadia, its cloud-based game streaming platform. The presentation showed off lots of ways the company is leveraging the game tech against its other products like YouTube and Google Assistant, but one particular point showed how games on Stadia could be a major boon for split-screen gaming. 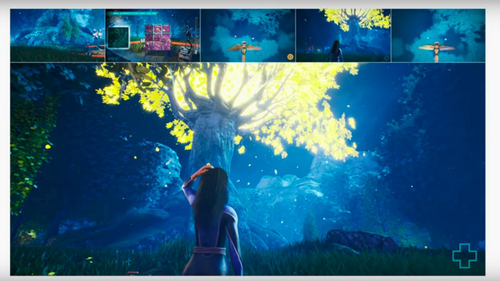 The moment came when lead research and development designer Erin Hoffman-John walked through various features, including multiplayer features. One tech demo showed Stream Connect, a purportedly easy way for developers to feed different views to each player. Since every player is being fed their own video stream of a play session, Stream Connect can combine these and feed one video inside of another player’s stream.

«Each of these screens is powered by a separate Stadia instance,» Hoffman-John explained. «But what would happen to squad-based games if developers could allow players to call up the views of their teammates on demand? Or utilize any polygonal surface as a receiver for another player’s video stream? Stream Connect makes this possible with extremely little effort on the part of the developer, bringing dynamic squad-based gaming into easy reach even for very small teams. We’ve shown you three views but we can keep going. We can keep adding streams and shape how they’re shown to the player.»

In the demo, this was used for each player in an asymmetrical game to see each other’s viewpoint alongside their own. The stream was also shown adding more and more views, and adding a hypothetical third player with their own «command center» view to direct other players.

Split-screen multiplayer has become less prevalent in recent years, in part because of the advent of online multiplayer, but also because it’s a strain on computing power. When a single PC or console has to render two separate player perspectives, developers usually have to drop the fidelity on both views to make it work. With a streaming solution and all the computing power being handled remotely, this would no longer be a problem.

For more on Google Stadia, catch up with everything we know and read our hands-on impressions. Or for more on cloud gaming as an emerging trend, read our primer on cloud streaming and which big companies are investing in the tech.