Most of the tough bosses in Sekiro: Shadows Die Twice are weapon-carrying warriors, who clash blades with you and require breaking through their guard to defeat them. Occasionally, though, you’ll face some huge beasts, like the Blazing Bull or the Great Serpent. The Guardian Ape is another such giant belligerent animal, and it can hit you with a variety of moves from various ranges, making it a difficult beast to best.

You’ll find the Guardian Ape on your road through the poisonous swamps of the Sunken Valley. The boss guards a flower you need to advance Sekiro’s story, so you’ll have to deal with it sooner or later—although if you can bulk up with Prayer Beads or by finishing off other bosses first, you might want to do so. Amping your attack power against the Guardian Ape is very useful, since you’ll have to do a lot of damage to it during the fight.

We’ve got everything you’ll need to know to deal with the Guardian Ape, from its poop-throwing antics to its sword-swinging mayhem. For more Sekiro guides, check out our giant (and growing) knowledge center about the game.

Slash Away To Do Damage

The Guardian Ape isn’t a boss you’re going to parry away at to knock down his posture. Instead, you need to deal damage to lower its Vitality, which means looking for openings to wail away at it with your sword. A lot of those openings are tough to find, and you won’t be able to do much damage. You’ll want to balance between being close to the Guardian Ape, so you can get in and do damage, and staying clear of some of its tougher moves. Stay at mid-range, and use the whole arena to get away from moves you can’t handle, while staying away from the walls so you don’t get hemmed in. 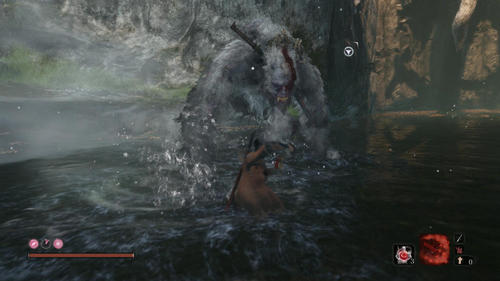 Be Sure To Parry

Just because the Guardian Ape isn’t using a blade doesn’t mean you can’t parry its attacks. In fact, the Guardian Ape is too quick and its arms too long for you to avoid most of its strikes; parrying is the only real way to stay in the fight and to keep close enough to do damage. The best time to attack is after the Ape’s big four-move combo—it starts with a swing from each arm, followed by an attack that’ll push you pretty far away, and ending with the Ape leaping in from above. Parry all of them, but especially the last two, and you’ll open up the Ape for a counterattack. This is one of your best opportunities to deal damage. Another is after the vertical swing the Ape does, in which it follows through to land on its back and flail around like it’s throwing a tantrum. Sprint around toward its head and get in a few attacks as it finishes rolling around, then get clear.

Grapple In And Go For The Face

One of the best opportunities for damaging the Guardian Ape comes from using your grappling hook. When the Ape stops to roar, it’ll expose the sword in its neck that lets you grab it to swing in. If you have it unlocked, use the Ashina skill that lets you attack after a grapple and you can come in and get two good swings at the boss’s face before you even hit the ground. You can also sometimes grapple in when the Ape is walking around the battlefield. You’ll need to stay relatively close, though, so you don’t miss the grapple opportunities, which are basically free damage. 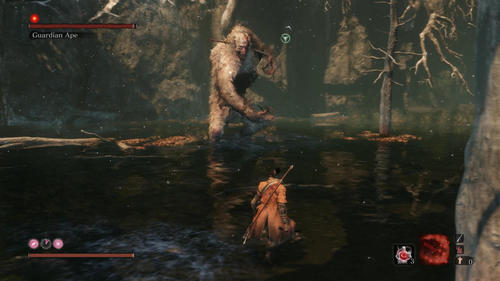 Stay Away From The Back And Dodge That Poop!

One set of moves will have the Guardian Ape swinging away at you, then coming around into a sitting position with its back to you. That makes a tempting target, but keep your distance, because the Ape has two ways of responding to your presence. The first way is to quickly spin around, pound the ground, and open up with a big swinging attack, all of which you’ll need to block or parry to stay alive. The second is to stand up more slowly and rip off a huge fart that drops green gas all over the area, which is poisonous. It’s better just to stay away.

The fart move is almost always followed by the Ape’s dangerous ranged attack, in which it poops in its hand, leaps into the air, and throws the giant turd in your direction. This is a tough attack because it’ll do quite a bit of damage, as well as potentially hit you with poison. If your poison meter is low, the most reliable way to handle the attack is to block it and take the poison hit. But if you’re risking poison affliction, try sprinting away and hitting the dodge button just as the turd would hit you to avoid it. Be aware that if you stay too far away from the Ape, you’re likely to trigger this attack as well, so it’s better to stay relatively close.

Most enemies are distracted by the Firecrackers prosthetic, and it’s very effective against animals like the Guardian Ape. That doesn’t mean it’s foolproof, but you can often interrupt the Guardian Ape’s attacks with Firecrackers, giving you a chance to get in close and knock out a few slashes. Like any boss, be careful not to use the Firecrackers when you’re already vulnerable, as they won’t always stop an attack animation that’s already started. They’re great for getting in a few good hits or for getting a little breathing room to heal. 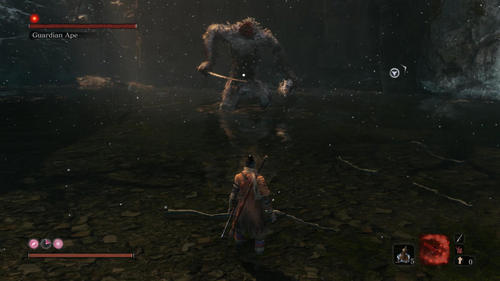 Once you lop off the Guardian Ape’s head, you’re actually not done fighting it—you’ll face it in a second round as a headless, sword-wielding monster thanks to its status as an Infested. The head is still dangerous, though. If you stay too close to the Guardian Ape, it’ll smash its head back against its neck and start screaming. The scream is a visible shimmer around the ape and if you’re too close, you’ll take damage—and you’ll experience Terror. If the Terror bar fills up, it’ll kill you, so make sure you get away from the Ape as fast as you can when you see the Perilous symbol appear. The best way is to just sprint directly away; look for the start of the move, which is the Ape starting to bring the head up toward its neck.

The Vertical Slash Gives You An Opening

A few moves are worth parrying to protect yourself or to get an opening, but there’s one key attack that you absolutely want to parry every single time you see it. That’s the vertical smash strike the boss does with its sword. You’ll know it because it’s a bit of a dancerly move, with the Guardian Ape raising the sword into the air and sort of wavering back and forth. It’s a bit of a delayed attack and takes a try or two to get the timing right, but parrying it is essential. A perfect parry on that move will cause the Guardian Ape to pitch forward and fall, lying on the ground for a few seconds so you can slash away at it. If you don’t go for any other attack opportunities, make sure you go for this one. The massive damage you can do will make the fight go pretty quickly.

Once you’ve beaten the Guardian Ape, you can continue through the Sunken Valley to the poisonous Ashina Depths, where you’ll eventually find a giant cave. Inside is your old pal Guardian Ape, now seemingly forlorn because he has to carry his head around with him everywhere, and yet cannot die. You can fight the ape one last time to get another Memory to increase your attack power.

The fight is broken into two phases. The first proceeds the same as your last fight with the headless version of the Guardian Ape did, and is generally pretty easy—especially if you remember to block the vertical attacks that stagger the boss and let you get in a bunch of free hits.

The second half of the fight is the tough one. Once you land a deathblow on the Guardian Ape, it’ll roar and call in its mate, a smaller brown ape that fights with many of the same moves the original, headed version of the Guardian Ape did. You’re now fighting two enemies at once, but it’s not as bad as it sounds. Target the brown ape, which is much weaker than the Guardian Ape, but try to keep both on your screen as much as you can. Focus on killing the brown ape as fast as possible. You should be able to do it pretty quickly, since the brown ape’s Posture doesn’t recover as fast as the Guardian Ape’s did, and it has much less health. Just do your best to keep the Guardian Ape in your peripheral vision so it doesn’t hack you up while your back is turned.

Once the brown ape is down, it’s a simple matter to finish off the Guardian Ape and land that final deathblow to sever its immortality.