Facing Genichiro marks your first humiliation in From Software’s latest punishing action game, Sekiro: Shadows Die Twice. After rescuing Kuro the Divine Heir from his captivity, you find Genichiro blocking your escape—and he quickly dismantles you for your insolence, quite literally.

After acquiring the Shinobi Prosthetic, though, you’ll venture out into Ashina on a quest to free Kuro and avenge yourself on Genichiro. You’ll get your chance before long, too, as he’s just at the top of Ashina Castle, which is not too far from where you start when you awaken after your battle. It’s possible to go pretty much straight there, besting a few bosses like the Chained Ogre, Gyoubu the Demon, and the Blazing Bull along the way. While the road is tough, nothing you’ve faced up to that point is as difficult as taking on Genichiro for the second time.

Luckily, we’ve got you covered. The tips below can help you deal with Genichiro’s powerful attacks, and allow you to finally best him and get your revenge.

Genichiro might be the first fight in Sekiro that really forces you to learn how to play the game. It’s not like From Software’s Dark Souls or Bloodborne games—the focus here is on trading blows and sword-fighting, and if you’re not playing aggressively enough with Genichiro, he’s going to beat you again and again. You have to get in close and fight to take him down.

That mostly means parrying. Genichiro is a swordsman and will come at you hard with various attacks, but apart from the thrust and sweep attacks, you can block and parry all of them. And you should; deflecting Genichiro’s attacks is the surest way to make openings to strike back and to whittle down his Posture. It’s an arduous process, but learning the rhythms of his attacks and parrying them will help you avoid damage. It’s also a skill you must have to succeed in Sekiro, and this fight works like a training gauntlet for the rest of it, making sure you finally are breaking your other Soulsborne game habits and learning the ropes. 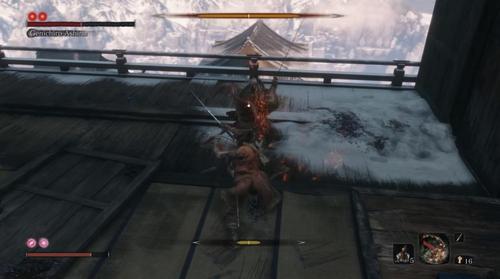 Genichiro has high Vitality, which means his Posture recovers quickly. You won’t break his defense until you’ve dealt him some damage to lower his Vitality bar. Looking for openings where you can slash at Genichiro is key, but you can usually do that by dodging some of his bigger attacks and getting in close during the follow-up. Attacking aggressively and parrying can let you get in for a lot of damage, but be careful of his powerful counterattacks, especially the ones in which he jumps in the air. We often found the best success when dodging his thrust and sweep attacks, then closing the gap while he recovered to hit him before getting out again. Like a lot of enemies, Genichiro can be whittled down pretty effectively if you batter him with attacks, so long as you’re quick enough to guard against his.

Genichiro likes to add arrows to his repertoire at a few points, and while they come fast, they’re an attack like any other—blockable and deflectable. Keep your guard up when you see them coming, because they often herald other attacks from Genichiro that you’ll want to dodge, deflect, or take advantage of to do some damage. He also likes to charge up a shot on you whenever you stop to use a healing gourd. The timing on that shot is such that you’ll be able to block or dodge it just as you come out of the healing animation, but be careful because it’s a big hit that can completely negate your heal.

Get Good At Mikiri Counter

Genichiro’s thrust move is one of his most punishing, but this is a great opportunity to really learn to use that Mikiri Counter—which is one of the best moves in the game, and something you should unlock from the skill tree early. It does a lot of Posture damage and gives you a chance at a big hit when you pull it off, and it’ll serve you well throughout the game, in various boss fights. 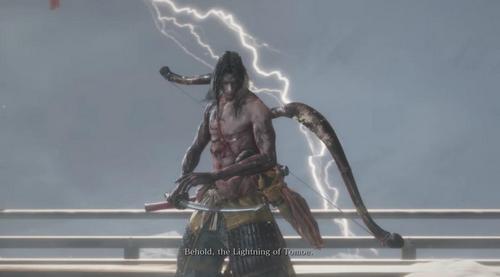 Once you’ve dealt Genichiro a deathblow, you’ll break into the second phase of the fight, in which he becomes much more aggressive and starts throwing elemental lightning attacks at you. The lightning can be tough to deal with and comes in two varieties: a straight-on arrow attack that’s pretty easy to dodge, and a sweeping sword attack that can be a lot harder to avoid. Both are perilous attacks, which means you can’t block them, but there is a way to deal with them that can give you a big boon against Genichiro.

The boss’s lightning only hurts you if you’re touching the ground when it strikes, and if it does, you’ll also take the Shock status effect, which can mess you up for a bit. However, if take the lightning hit while in the air, you can use your attack button to send it back at Genichiro, zapping him and giving you a chance to get in a bunch of hits. Returning the lightning is the best way to deal with it, but the timing can be tough—the sword attack in particular is a bit delayed from the Perilous indicator that marks it, and if you jump too early, you’ll take the full hit. If it’s too much to deal with, try sprinting away and putting distance between you in Genichiro to get clear of the lightning attacks altogether.

Watch For The Flying Thrust

Lightning Genichiro likes to come at you in the air with a powerful Perilous blow, and he’ll do it pretty often. The thing is, it’s easy to avoid by backing up or dodging backwards. It’s a frustrating attack if it hits you, but it’s a great opportunity to deal damage in the meantime. He’ll always land short if you pull back, so punish Genichiro for using this move and you’ll speed along finishing him off in the second phase. You can also land a Mikiri Counter on this move for some major Posture damage.

We’ve been killing bosses and writing down what we’ve discovered the whole way through Sekiro: Shadows Die Twice. Check out our big guide roundup for help with a bunch of bosses, our tips to help you stop dying so much, and our explanation of how to find and unlock the Bell Demon and Hard Mode.

Nepal Makes Playing PUBG a Crime, But Is It Just a Scapegoat for a Larger Problem?