It’s really satisfying being able to pull off a combo that gets you into the SSS ranking in Devil May Cry 5. Featuring a trio of badass devil hunters—returning favorites Dante and Nero, as well as newcomer V—you’ll realize that they each bring a dazzling set of skills that show off a remarkable sense of style and energy in a fight. But there’s a lot more to slaying demons than simply firing your gun or swinging your oversized, engine-powered sword. As an action game that possesses the depth of complex fighting games, you’ll need to learn and understand the subtle mechanics and nuances of its main cast in order to leave an impression on Devil May Cry 5’s enemies. 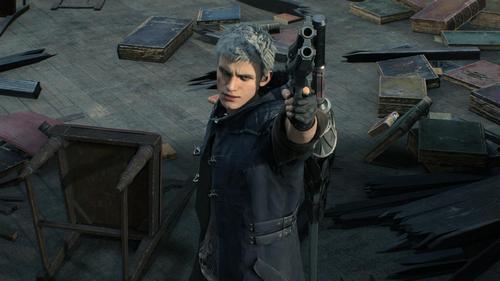 In this guide, we’re giving you the rundown on one of Devil May Cry 5’s main protagonists—particularly the brash and hot-headed Nero. Whether it’s getting a handle of the timing for his Exceed mechanic, or deciding which Devil Breakers you should use, Nero has plenty of options when it comes to taking down demons. If you’re willing to take the time and learn how each character functions, you’ll be able to get the elusive SSS ranking in no time.

So with that, here’s our breakdown on Nero in DMC5. Be sure to watch the gameplay video above at the 03:30 mark to see what SSS rank combat looks like for Nero. If you want to know more about Dante and newcomer V, head on over to our guides for those characters, as well as our walkthrough on how to find all the Secret Missions. For more info on Devil May Cry 5, read our full review.

As one of the more accessible characters, the charismatic and scrappy Nero features a move set that carries over a number of returning mechanics from DMC4, which includes his familiar long-range grapple moves. With a skill set that emphasizes timing and charging up attacks, Nero’s playstyle is all about creating opportunities and executing primed up attacks with his Red Queen sword, Blue Rose revolver, and Devil Breakers. Devil Breakers are Nero’s newest weapon, allowing him to bring in a customizable set of special arms into battle. This new mechanic can alter his normal attacks and introduce some exciting moves that can slow down time or give him additional projectile attacks.

Nero is the most agile and acrobatic character in the game, and he possesses excellent evasive skills and prowess at fighting enemies in the air. With his Table Hopper ability, Nero can execute a series of jukes and careful dodges right when an enemy is about to attack, allowing him to move into their blind spot in incredibly slick fashion. Nero also has several attacks that allow him to stay in the air, including his Roulette and Calibur skills. If there’s a good way to describe Nero, he’s essentially the brawler of the trio, focusing on fast, heavy hits while being able to slip out with a dodge when he needs to.

The Devil Breakers are truly a game-changer for Nero when paired with his basic move set. These special arms allow you to pull off some very powerful, if a bit bizarre, actions for Nero, greatly expanding his repertoire of skills. For instance, the default breaker is the Overture, a close-range arm that conjures up a massive lighting fist that can also be turned into a remote bomb. Also, Gerbera’s aerial burst attack—which doubles as a dodge—can be extremely effective when you want to keep yourself and the enemies in the air. Unfortunately, the breakers are very fragile and getting hit while using them will cause it to shatter. So you’ll need to carefully pick which moment is best to use them.

One of the main mechanical restrictions for the Devil Breakers, however, is that you can’t freely switch off between the arms in your magazine. In order to shift over to your next arm, you’ll have to break it yourself (creating a small explosion in the process) or use up the arm’s charged attack. With this in mind, you’ll want to customize your loadout to complement your particular playstyle and approach. Though Gerbera and Overture are always reliable to have, other worthwhile breakers to use are the Punch Line and the Tomboy. Punch Line is an extremely fast rocket arm that can target a single enemy and hit them multiple times, while the Tomboy overcharges Nero’s sword and gun, greatly altering its attack pattern and strength.

When playing as Nero, the best way to build up to the SSS ranking is to keep moving, evade enemy attacks, and rush in with fast hits on a constant basis. One of Nero’s most technical combat skills to master is his Exceed mechanic. With his engine-powered sword, you’ll be able to tap the left trigger to charge up his attacks for extra damage. Though you can hold and tap the trigger multiple times to build up energy, the more efficient way to get a charge is by tapping the Exceed button as you simultaneously swing your sword. If you can nail the timing, you’ll be able to amplify its attack strength instantly. Mastering the timing can be extremely useful during a fight, as you can chain together multiple charged attacks together during a single combo. Unlocking the MAX-Act skill will allow you to fully charge the Red Queen to its limit with a well-timed tap of the Exceed button.

Nero is also effective at bunching up enemies with his attacks. The Streak combat skill—a rush attack that drives Nero forward with his sword—is a move to push enemies together, but the Exceed-variant of the move will turn it into multiple hits. With a set of enemies bunched up together, you can use one of his Devil Breakers to damage the stunned group. In this instance, Punch Line’s normal attack is a solid move, but the Gerbera’s special—either the ground attack or the aerial variant—are great choices to use when the enemies are bunched up or when you’re fighting in tight spaces.

Nero is extremely proficient in rush-down tactics, but for some extra finesse, he can also use some of his unique taunts—which just so happen to have some advantages in combat. Taunting is normally a good way to build up style ranking, but some of Nero’s taunt actions can even charge energy for his sword and gun. In addition to this, Nero is the only character in the game that has an aerial taunt—which is a surprisingly effective way to dodge attacks and get some extra airtime. By taking advantage of Nero’s multi-functional arms, his aerial tactics, and his great speed and rush-down potential, you’ll be able to work your way up to SSS rank in no time at all.

ThinkGeek Is Running A Buy Two, Get One Free T-Shirt Sale Right Now