It’s been a while since the gaming world saw a new entry in Lorne Lanning’s Oddworld franchise — even longer since the last (actually) new entry was released. 2014’s Oddworld: New N’ Tasty was a remake, and the lack of new entries even led some to classify Lanning and his team among the forgotten developers of gaming.

That streak was ended two years ago in a press release that announced Oddworld Soulstorm, a sequel to New N’ Tasty developed as part of a collaboration between Frima Studio, Fat Kraken Studios, and Sabotage.

Now, fans can get a taste of what to expect from Oddworld Soulstorm in a new cinematic teaser trailer. Specific details about the game itself are still scant. However, the trailer does show off the game’s graphics and use of textures, along with giving a slight tease about the game’s plot.

Lanning and his team also released a breakdown trailer of the trailer, showcasing new effects and techniques used to make the game look the way it does. You can find that here.

The Oddworld games are known for being, well, odd. But they also appeal to players by mixing quirkiness and the grotesque with brutal commentary on the modern world, particularly the evils of industrialism and rampant capitalism. 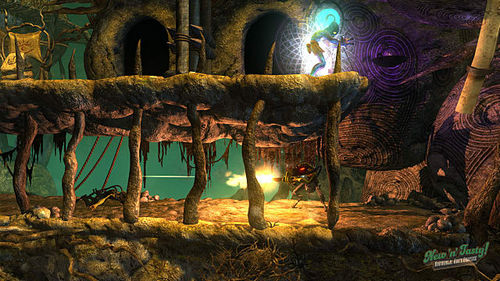 Soulstorm is positioned in an interesting place in the Oddworld timeline. Technically, it’s the second game in the mainline series. New N’ Tasty was a remake of the first game, Abe’s Oddysee, and Soulstorm is said to be a sequel to that, but no word was given yet about how it might relate to other games in the Oddworld universe.

There also wasn’t any word on what platforms fans can expect the game to be on.

Lanning made headlines in 2017 for his volatile and inappropriate reaction when his games weren’t initially on the Nintendo eShop, though he quickly presented a different face in 2018 after announcing Oddworld: Stranger’s Wrath would be ported to the Switch.

Whether the Switch could handle Soulstorm‘s graphics acceptably is another matter, so we’ll just have to wait and see.