Amazon has announced that, starting right now, Twitch Prime members can claim a free three months of Nintendo Switch Online. You just need to sign-in to claim your three months, and if you come back after 60 days, you can get another nine months added to your account. That’s a year of Switch Online for free.

If you already have Switch Online, you can still take advantage of this deal. Just sign-in and be sure to renew the deal after 60 days so you can get all 12 months added to your account. Whether you’re signing up for Switch Online for the first time or adding free time to your account, you have until September 24 to grab your first three months and until January 22, 2020 to claim the additional nine. 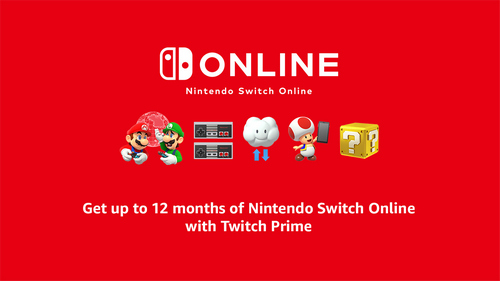 A Switch Online subscription offers more than being able to play the online multiplayer component in games like Splatoon 2 and Super Smash Bros. Ultimate. With a subscription, you get access to a library of classic NES games that you can play as much as you want. New games are added every few months, with 1998’s Blaster Master and Zelda II: The Adventures of Link added this past January. Subscribers also get access to cloud saves, allowing them to recover their data should their Switch console break or be stolen.

Normally, individual Switch Online subscriptions cost $4 USD a month, $8 USD for three months, and $20 USD for 12 months. For $35 USD a year, you can subscribe to a Switch Online Family Membership, which includes the service for eight different consoles.

Amazon has already been creating video game-related benefits for Twitch Prime members, offering free PC titles every month. You still have time to download the four March 2019 games, which will no longer be offered once April begins. Until March 31, with Twitch Prime, you can download the puzzle RPG Star Vikings Forever, artsy platformer The King’s Bird, multiplayer pinball game Kabounce, and puzzle platformer Snake Pass. To claim these games, you must make sure you Amazon account is linked to Twitch.