Nintendo is holding a new Splatfest event in Splatoon 2 this weekend. The 24-hour competition kicks off on Friday, March 15 at 9 PM PT (12 AM ET on March 16), and as usual, it asks players to represent one of two opposing teams in Turf War. This time, however, you’ll be able to face off in special outfits.

The theme for this month’s Splatfest is knights vs. wizards. As always, players will choose one of the two sides from the Splatfest terminal in the game’s main plaza and try to rack up as many wins for their team as possible during the event. However, unlike previous events, you’ll be able to dress like your team of choice if you have the appropriate gear. 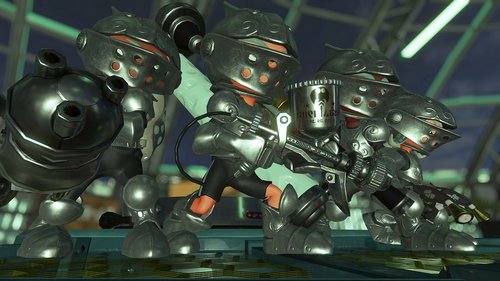 During each Splatfest, once you’ve chosen a side you’ll receive a special in-game t-shirt representing your team. You’re able to equip any headgear or footwear you own during the event, but you typically cannot change your t-shirt until the Splatfest has concluded.

This time, however, if you wear headgear and boots from the Steel or Enchanted lines—which are unlocked via the Octoling Boy and Octoling Girl Amiibo figures, respectively—your Splatfest shirt will automatically change to match, letting you battle it out in full knight or wizard regalia.

Ahead of the Splatfest, Nintendo recently rolled out Splatoon 2’s 4.5.0 update. This patch primarily makes balance adjustments to a range of weapons, most notably nerfing several Sloshers and buffing a handful of Blasters. You can read the full patch notes for the 4.5.0 update on Nintendo’s support website.

Here’s How Apex Legends’ Battle Pass Can Pay For Itself