In the lead up to PAX East, Gearbox teased that we’d potentially see multiple new games unveiled. Despite some technical issues hampering the reveal during the panel, one of those has turned out to be an enhanced re-release of an existing game, Borderlands: Game of the Year Edition. This version of the original game in the Borderlands series is seeing a new release on current-gen platforms, but it’s not a mere port—it also packs in new content, including more weapons, in addition to a variety of other improvements to gameplay. It releases next week, and you might be able to get it for free, provided you already own the game on PC. You can see a trailer above and check out some screenshots below.

This new Game of the Year Edition is described as the «brand-new definitive version.» It’s set for release on PS4, Xbox One, and PC, and features the same basic content as the original game, complete with all four of its DLC packs: The Zombie Island of Doctor Ned, Mad Moxxi’s Underdome Riot, The Secret Armory of General Knoxx, and Claptrap’s New Robot Revolution.

The Game of the Year Edition will feature visual improvements suited to the new platforms. Gearbox boasts that PS4 and Xbox One X players (and presumably those with adequate PC hardware) can play in 4K and HDR, but all platforms will include «improved lighting, textures, and character models.» 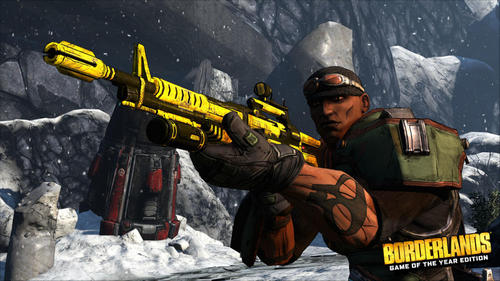 Beyond visual changes, there are quality-of-life improvements and changes coming to impact gameplay, too. An optional minimap similar to the one found in Borderlands 2 is being introduced, while inventory management will be overhauled. You’ll now be able to lock weapons that you want to ensure stay safe, while those you don’t care about can be labeled as junk to make disposing of them more straightforward. Similarly, you’ll no longer have to worry about picking up ammo, money, and health, as that will now be done automatically.

A handful of new guns are being added. Six «named, custom-skinned» Legendary-tier weapons will be available as drops from bosses or through the use of Golden Keys. Those keys tie into the Shift rewards system, which lets you cash in keys for «special in-game items and rewards» similar to later games in the series. If you’ve played Borderlands 2 or The Pre-Sequel on PS4, Xbox One, or PC, you’ll be entitled to 75 Golden Keys for free here, as well as two «randomly selected» new weapons.

Another new element is the ability to customize your character. Whereas the game previously only allowed you to select colors, you can now choose one of five different head options for each of the four characters.

And finally, Gearbox says it’s heeding complaints from fans and will update the campaign’s final boss. It should now be «more engaging, challenging, and rewarding.»

Game of the Year Edition is coming quite soon—it releases for PS4, Xbox One, and PC on April 3, which is just a few days away. It will be available physically and digitally on console, while the PC version is digital only. However, if you already own Borderlands on Steam, PC players will get this updated version for free.

Alongside this, Gearbox shared a variety of other news. Regarding Borderlands specifically, it confirmed Borderlands 3 and announced visual improvements coming to Borderlands: The Handsome Collection. With all of this coming, Gearbox has dubbed this the Year of Borderlands. That might suggest Borderlands 3 is releasing this year, but at this point, no release date has been specified. More information on that game will be shared on April 3.

The Game of the Year Edition news doesn’t come as a complete surprise, as a ratings board listing last year suggested just such a re-release was coming. However, it is encouraging to see this is more than just a mere port. Alongside this, Gearbox also finally announced Borderlands 3, along with free visual improvements coming to Borderlands 2 and The Pre-Sequel.

Borderlands was originally released in 2009, so this announcement comes just ahead of the series’ 10-year anniversary. The Game of the Year version followed that in 2010, bundling the base game with its four DLC packs.