Even early in Sekiro: Shadows Die Twice, there are some tough boss battles to deal with, but they can be made a lot easier with the right weapons and items. There are a bunch of early prosthetics you shouldn’t miss, like the Flame Vent, which can be a huge help fighting the Chained Ogre. Lady Butterfly, a fast-moving boss who uses illusory apparitions to aid her, is another fighter who’s a lot easier if you have the right equipment.

Dealing with Lady Butterfly is a lot easier if you have Snapseeds, a consumable item that breaks the illusion of the boss’s apparitions. You’ll get one Snapseed from a samurai just outside the room where you fight Lady Butterfly, but it runs out pretty fast. Snapseeds aren’t essential to defeating Lady Butterfly, but they make the fight a whole lot easier. The trouble is, Snapseeds are difficult to come by and only located in certain locations, and you can’t buy them from merchants.

You can find Snapseeds quickly to fight Lady Butterfly if you know where to look, though. Tracking them down requires you to head back to the Ashina Outskirts and deal with another tough enemy: the White Serpent.

To find the Snapseeds, start by heading to the Underbridge Valley area in Ashina Outskirts. You’ll find the location soon after beating the Chained Ogre boss. As you head down past the Idol Statue for the location, you’ll encounter the giant White Serpent, a massive boss that hunts you for your entire passage through the area.

The trick to passing the White Serpent is stealth. Stay low and hidden in the tall grass, wait until the serpent’s attention is elsewhere, then leap across the valley and use your grapple to get clear. Repeat the process of sneaking and avoiding the serpent until you reach the wooden palanquin, where you can briefly hide from the snake. When it gets close to try to look inside, you can do a deathblow on its eye, causing it to flail around in horror and pain, giving you a chance to make a run for the exit of the area beyond. 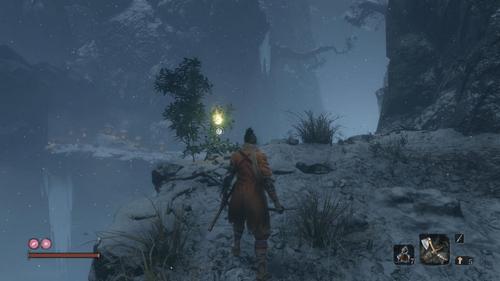 Once you’re clear of the snake, you’ll hit the Ashina Castle Gate Fortress and its corresponding Idol Statue. Don’t continue once you get there, though. Instead, double back to where you fought the snake. You should see a glowing item on the hillside right near the palanquin where you stabbed the White Serpent, marking a bush on the mountainside. Head to it and you can grab five Snapseeds from the bush.

It’s advisable that you spend some time fighting Lady Butterfly before using your Snapseeds, though. The apparitions you don’t destroy either with your sword or with the seeds will turn into ethereal butterflies that can damage you, but they’re easy to dodge or block with the wooden beams around the area. If you do use Snapseeds, make sure you’re close to the apparitions before you activate them—they create a wave around you that dispels the ghosts, but if you’re too far away, it won’t work.