Ice cream is popular around the globe but it’s high in saturated fat – which is linked to higher cholesterol, heart disease and strokes.

Producing a version of the dairy treat without the unhealthy substance would be the Holy Grail for ice cream makers.

Now one scientist from the University of Copenhagen is developing a way to do just that.

‘Saturated vegetable fat is solid…. So what I’m trying to do is to make ice cream with liquid oil,’ she told Reuters. 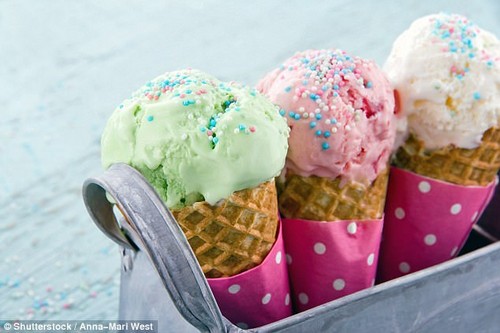 Dr Munk says that as well as health benefits, there are environmental advantages to this potential new way of manufacturing ice cream.

Many ice creams contain palm oil – the most widely consumed vegetable oil on the planet causing widespread rainforest destruction and a threat to endangered species.

‘If you could select an oil that, for instance was growing locally – let’s say here in the north there’s a lot of rapeseed oil being produced –  so it would both mean for the manufacturer that that there will be much bigger selection of oils but also that you can choose whatever oil that is growing near you,’ said Dr Munk.

The research is being carried out in collaboration with Scandinavian fat supply giants AAK.

Dr Munk plans to test her new technique at production scale next month, while adding flavours. If and when the method as validated, AAK may seek to commercialise a fat-free ice-cream product.

Canola oil has been heavily marketed as a healthy choice because it is low in saturated fat.

But a new study suggests the trendy kitchen staple could worsen memory loss and learning ability in Alzheimer’s patients.

It may also increase the build-up of plaques in the brain, a hallmark of the degenerative disease.

And despite its seemingly wholesome profile, researchers discovered it caused weight gain.

The findings suggest for the first time that long-term consumption of canola oil is not beneficial to brain health.

Canola oil is appealing because it is less expensive than other vegetable oils, and it is advertised as being healthy,’ said senior study investigator Professor Domenico Praticò, director of the Alzheimer’s Center at Lewis Katz School of Medicine at Temple University (LKSOM) in Philadelphia.

‘Very few studies, however, have examined that claim, especially in terms of the brain.’