Cases of the winter vomiting bug have rocketed by 13 per cent in just a week, official data reveal.

Government statistics show 1,475 people have been infected with norovirus since July, compared to 1,294 last week.

The jump in cases, which has been increasing at a similar rate week-on-week since October, could hurt the NHS if it continues, experts fear.

It comes at time when the health service is already bracing itself for the dreaded ‘Aussie flu’, expected to be the ‘worst outbreak in 50 years’.

Government statistics show 1,475 infected people have been infected with norovirus since July, compared to 1,294 last week

Norovirus is one of the most common stomach infections in the UK and it is referred to winter vomiting bug as it usually occurs at this time of year.

Usually it clears up by itself within 24 to 48 hours but it can very serious for already frail patients, and can lead to dehydration.

The virus, which can also cause diarrhoea, is extremely contagious and can create huge disruption in hospitals as it spreads so quickly between patients.

But the winter vomiting bug has a tendency to mutate and some strains are worse than others, leading to higher numbers of infections.

Some of Australia’s A&E units had ‘standing room only’ after being swamped by more than 100,000 cases of the H3N2 strain.

Official figures are yet to confirm how many people have lost their lives to this year’s outbreak, but 370 deaths have been reported so far.

The elderly with their compromised immune systems are particularly susceptible, and a spike in cases among young children has also been shown. 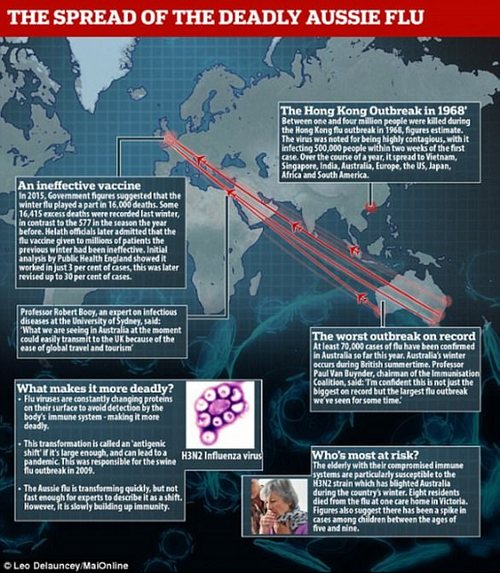 The same strains of the virus will circulate north in time for the British flu season, which typically begins in November and lasts until March.

But there are concerns the vaccine, made by World Health Organisation scientists, will prove to be ineffective as it will not match the H3N2 strain.

Scientists create the vaccines in March, based on which flu strains they expect to be in circulation. They are then given out in September.

Some health experts in Australia have blamed the severe outbreak on it having mutated. The vaccine used in the UK will be very similar.

The latest PHE figures, released yesterday, also show there were 10 outbreaks in hospitals – all of which led to ward closures or restrictions.

Professor Nick Phin, of PHE, previously said: ‘Those who get infected with norovirus will usually make a full recovery within one to two days.

‘However, it is important to drink plenty of fluids to prevent dehydration, especially in the very young or elderly.

‘Good hygiene is essential to preventing infection. This includes thorough hand washing after using the toilet and before eating or preparing foods.’

An unprecedented winter ahead

Its comments were provoked by chief executives of two hospitals who admitted their bed occupancy rates are 98 per cent and 99 per cent respectively.

And concerned doctors warned patients will have to ‘sleep, take paracetamol and pray’ ahead of the impending winter crisis.

The NHS is expected to face unprecedented pressure in the coming months, as campaigners fear it will be disastrous amid soaring waiting lists in A&E.

The Red Cross branded the situation a ‘humanitarian crisis’ – a term used to describe the devastating civil war in Syria and Yemen.

First ever prescription video game may be approved