A five-year-old boy is seen as a ‘devil’ due to his one-stone hand that is larger than his head.

Tajbir Akhtar, from Bangladesh, has been shunned by villagers, who have even asked his mother, Parvin Akhtar, to keep her son out of their sight.

Forced to live like a recluse, Tajbir, who appears to be suffering from Elephant Foot disease, does not attend school and has no friends.

‘It is painful to see my child being bullied by people.’ 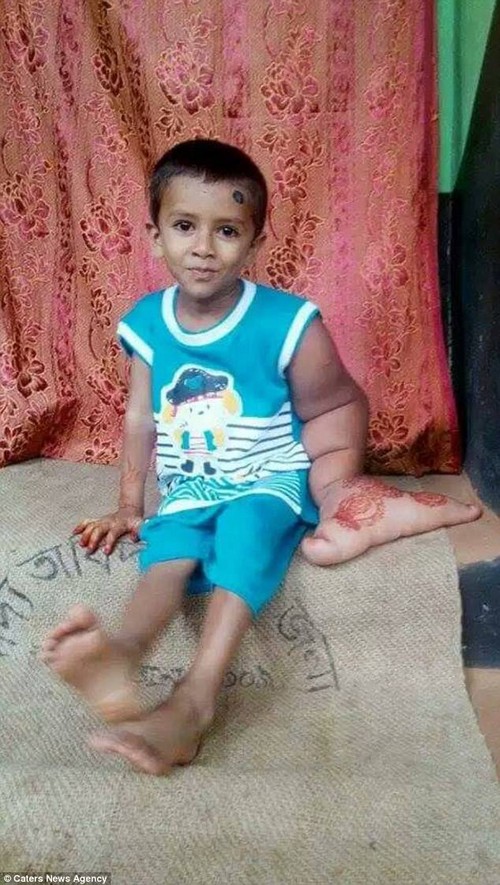 Tajbir Akhtar has been shunned, with villagers asking his mother to keep him out of their sight

WHAT IS ELEPHANT FOOT DISEASE?

It is most commonly caused by a parasite carried by mosquitoes.

The legs and genitals are usually affected, which become thick and saggy.

In severe cases, blood vessels can be damaged, which could be fatal.

Treatment is antibiotics to cure the parasite infection.

Surgery is performed if the swellings are abnormally large.

‘They call him a devil’

‘It is painful to see my child being bullied by people.

‘His hand is thrice the size of children his age. It is so heavy that he cannot hold its weight and stumbles while walking or running.’

‘His days are spent inspecting the hand. He cries all day and demands an answer. He is always curious to know why his hand is abnormally bigger than other kids in the neighbourhod.

She said: ‘I always tell him that Allah has created him in a different way, and by his will he will be able to get normal hands and soon will have friends.

‘But how long can I give him hopes? I want my child to live a normal childhood but what can we do? We do not have the means to get him medical treatment.’ 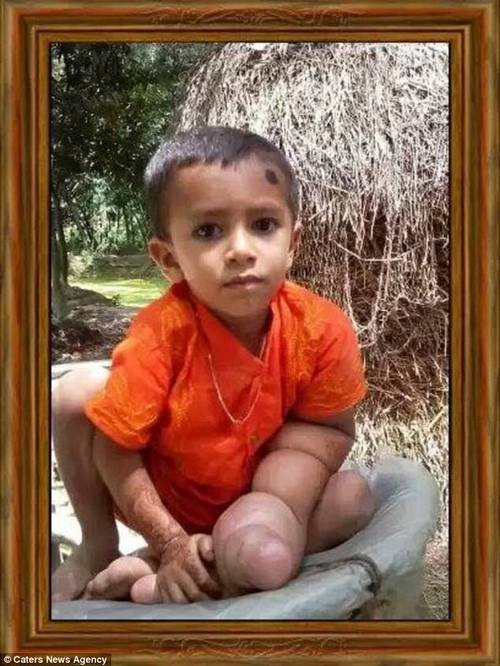 Forced to live as a recluse due to his deformity, Tajbir doesn’t attend school and has no friends

Tajbir was born after desperate prayers by his mother and father Toufiqul.

The couple threw a feast for their friends and family to celebrate his birth, but their happiness faded when their son was just a few months old and they noticed the first signs of the rare disease.

Tajbir’s father, a labourer who makes just £30 pound a month, said: ‘We were blessed with a girl and wanted a son. When he was born we thought our prayers were heard but within three months his hand started swelling.

‘At first, it looked as if a wasp has stung him but the hand kept on growing bigger and bigger. His fingers started growing thicker and gradually changed the shape.’

The couple have made many visits to local doctors, but are unable to afford the expensive operations Tajbir requires.

As Tajbir’s conditioned progressively worsened, his father left to work in Malaysia in the hope of earning more. Yet, he was still unable to afford Tajbir’s treatment and returned home three months ago.

He said: ‘I do not have enough to feed the family, footing his medical bills is beyond my capacity.

‘Whatever money I could save I spent it all on his initial treatment but I have nothing left now.’

The desperate parents may have some hope due to the social media activist Mamun Biswas.

Mr Biswas said: ‘I was told by a local contact about his condition and was shocked to see him. The child needs immediate treatment. I have brought the matter to the health secretary and soon will see when can the government doctors start the treatment.’