Royal Bank of Scotland (RBS) chief executive Ross McEwan has signalled that the bank is moving on from its troubled past after it posted its third straight quarter in profit.

It is only the second time since the 2008 financial crisis that the bank has turned a profit for three consecutive quarters.

RBS, which is still 72 per cent taxpayer owned, recorded a £392million third quarter profit, swinging back from a £469m loss a year earlier and bringing its profit year to date to £1.3billion.

Upbeat outlook: Royal Bank of Scotland chief executive Ross McEwan has signalled that the bank is moving on from its troubled past after it posted its third straight quarter in profit.

McEwan has stripped out £708m in costs so far this year, reducing the size of the business, with the lender on track to hit a £750m target for 2017.

He said: ‘Our strategy to deliver a simpler, safer, customer-focused bank, is working.

‘We have grown income, reduced costs, made better use of our capital and continued to make progress on our legacy conduct issues.

‘Our core bank continues to generate strong profits and we remain on track to hit our financial targets.’

However, adjusted operating profit was down at £1.2bn for the July to September period compared with £1.3bn last year.

RBS, which said it had made no further provision for the mis-selling of payment protection insurance, also detailed £125 million in conduct and litigation costs and £244 million in restructuring charges, increasing the total year to date to £1.5bn.

The group has racked up several billion in litigation and conduct costs since it was rescued by the Government at the height of the financial crisis.

Earlier this year, RBS agreed a £4.2bn US settlement over claims that it mis-sold toxic mortgage bonds in the run-up to the crisis.

However, it is yet to reach a separate settlement with the Department of Justice (DoJ), which is expected later in the year, although McEwan has warned there is a chance it could drag on into next year.

If a settlement is reached this year, it is likely to push the bank into a full year loss.

RBS, seldom out of the headlines, was warned by Britain’s financial watchdog on Monday that it may still face action over its treatment of small business customers.

In the black: RBS, still 72% taxpayer owned, recorded a £392m profit for the third quarter, swinging back from a £469m loss a year earlier.

Despite dismissing ‘serious allegations’, the Financial Conduct Authority said it was investigating whether there was ‘any basis for further action’ after publishing an interim report into RBS’s Global Restructuring Group (GRG) following intense political pressure.

In response, RBS said it had acknowledged its failings and again apologised for its mistakes.

Yesterday, the bank also paid out £33.4m to settle a US criminal investigation that accused its traders of lying to customers over bond prices between 2008 and 2013.

RBS said it has self-reported that issue to the US authorities and was pleased the matter was now resolved.

Neil Wilson, senior market analyst at ETX Capital, said that the lack of an update on the DoJ investigation and the spectre of GRG left a question mark over whether the bank can return to profitability next year.

‘Shares have risen 60 per cent in the last year as RBS has begun to show profits, but if investors get a whiff that profits are not coming next year they may lose patience.

‘Following the Q1 results we noted how RBS may have finally turned a corner and believed Q2 cemented this view.

‘But as then we must urge caution around the investigation into mortgage backed securities by the Department of Justice.

‘RBS earmarked about £6.6bn for that so far but this might need a little more.’

Whatever else it needs to set aside may well eat up all the profits it makes in 2017.’

Wilson added that heavy cost cutting and fewer conduct charges had boosted the business too. 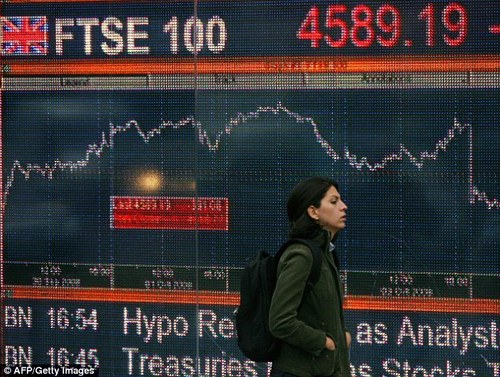 Troubled times: The group has racked up several billion in litigation and conduct costs since it was rescued by the Government at the height of the financial crisis

‘The axe is still chopping away at costs – adjusted operating expenses have reduced by £708million for the year to date, making it on track to achieve the £750m target for the year,’ he said.

‘RBS is aiming to cut costs by £2bn over four years. As previously noted, there remains a question mark over how sustainable it is to continue in this fashion.

‘RBS has cut costs at roughly £1bn a year for the last three years, whilst shedding a third of posts since 2013.

‘Cutting out the fat and around the margins is fine but eating into the core business is a risk but one that is working for now.’