Former Vice President Joe Biden, the current frontrunner, was the target of many of the candidates’ attacks. But Biden struck a shaper and more aggressive tone than in the first debate when he came off as shaky and flustered.

The final night of the second 2020 United States Democratic presidential debate kicked off with fireworks on Tuesday, with candidates clashing over immigration, healthcare and race.

The former vice president was repeatedly forced to defend his decades-old political record against pointed attacks from his younger, diverse rivals, who charged that Biden’s eight-year relationship with former President Barack Obama was not reason enough to earn the Democratic nomination.

On Tuesday, a different 10 candidates took the stage, with moderates and progressive clashing over healthcare and socialism.

Although the first primary votes won’t come for six more months, there is a sense of urgency for the lower-tier candidates to break out. More than half the field could be blocked from the next round of debates altogether – and possibly pushed out of the race – if they fail to reach new polling and fundraising thresholds implemented by the Democratic National Committee.

Here’s where Wednesday’s group of 10 stood on some of the major issues.

Biden and Harris clashed over their duelling healthcare plans

The pair had a tense exchange during the opening debates last month in Miami – and wasted little time before going at it again Wednesday.

Harris said her proposal would extend health insurance to all Americans, while Biden’s would “leave out” almost 10 million. 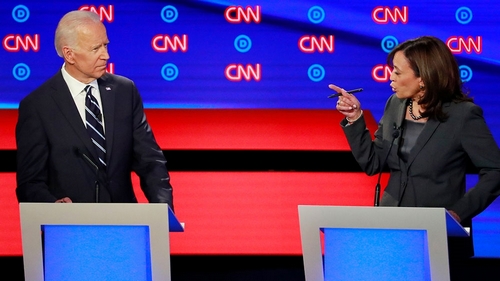 Biden said her plan was too expensive and would cause many people to lose their current, employer-based health insurance. He said Harris wasn’t being straight about that, adding, “You can’t beat President Trump with double-talk.”

Bennet also weighed in, suggesting Harris hadn’t been up-front about planks of her “Medicare for all” plan.

Harris released details of her healthcare plan earlier this week. It would allow private Medicare plans that follow certain federal guidelines, and it would include a tax on household income over $100,000.

Harris accused Bennet of using “Republican talking points”. She defended her plan by insisting it didn’t make anything illegal, but rather “separates the employer from healthcare”.

Biden and Castro clashed over immigration.

Castro has promised to make crossing the US-Mexico border irregularly punishable by a civil penalty and repeated that call on Wednesday.

He said that didn’t mean endorsing “open borders”, but said some in his party, including some on the debate stage, have “taken the bait” and fallen for a Republican talking point.

Biden said he didn’t support decriminalising such border crossing. He also said he never heard Castro “talk about any of this while he was secretary”. 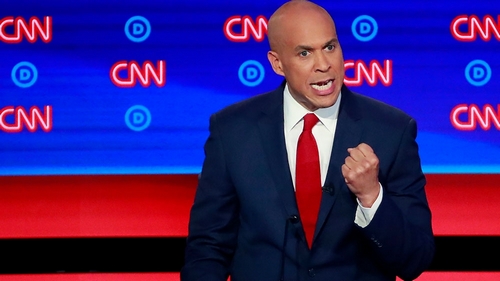 Booker then took his turn to go after Biden over the flaws he saw in former President Barack Obama’s immigration policies.

Booker likened Biden’s stance on immigration to that of Trump.

Booker said Biden’s proposal to allow immigrants who attend US universities and earn doctorate degrees to remain in the country for seven years plays into the hands of Republicans.

Booker said Biden “can’t have it both ways”.

“You invoke President Obama more than anybody in this campaign. You can’t do it when it’s convenient and then dodge it when it’s not,” Booker said.

As expected, Trump was a major target in Wednesday night’s debate. The event comes after weeks of racist and racially-charged comments from the president, including telling four congresswomen of colour to “go back” to where they came from and calling the black-majority city of Baltimore “rat -infested”. 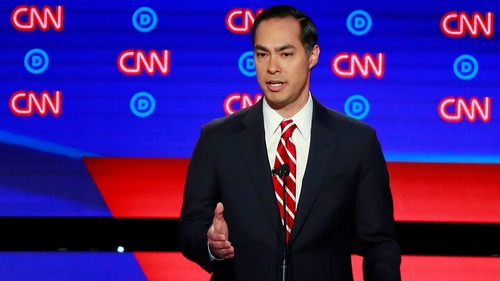 Some of Wednesday night’s candidates took the opportunity to call Trump a “racist”.

“We can no longer allow a white nationalist to be in the White House,” Inslee said as candidates debated immigration policy.

Castro followed up later by calling Trump a “racist”.

Gillibrand said she felt a responsibility as “a white woman” to challenge institutional racism and explain what white privilege was and meant. She said it was not just up to the two leading black candidates, Harris and Booker, to talk about race.

Discussing race, Harris charged that Biden’s past work with segregationists in the US Senate could have prevented Obama from becoming the nation’s first black president.

When pressed, Biden repeatedly leaned on his relationship with Obama.

“We’re talking about things that occurred a long, long time ago,” Biden said. He added: “Everybody’s talking about how terrible I am on these issues. Barack Obama knew who I was.”

Biden was flanked by Harris on one side and Booker on the other. As Biden greeted Harris onstage moments before the opening statements, he quipped, “Go easy on me, kid.”

During his opening remarks, Biden said Trump was tearing at the “fabric of America” and highlighted the value of diversity in his opening statement.

“Mr President, this is America,” Biden said of the diverse slate of candidates on stage.

“This becomes a moment we must fight for the best of who we are,” Harris said. “We are better than this.”

Gillibrand said engaging with climate change would be her top priority if elected president – but the first thing she would do if elected was “Clorox the Oval office”.

Democratic presidential candidates largely agreed on the overall goal of addressing climate change but differed in degrees of urgency.

Inslee said “middle-ground solutions like the vice president has proposed … are not going to save us. Too little, too late is too dangerous”.

Biden said he was committed to re-engaging the international community on combating climate change and rejoining the Paris Climate Accord.