The Ebola outbreak in the Democratic Republic of the Congo (DRC) is a global public health emergency, the United Nations health agency has announced, just days after the epidemic spread to a major urban hub for the first time. 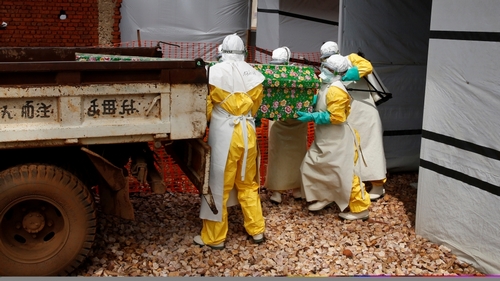 The World Health Organization (WHO) made the declaration on Wednesday following a meeting of its emergency committee in the Swiss city of Geneva.

“It is a measure that recognises the possible increased national and regional risks and the need for intensified and coordinated action to manage them,” WHO said in a post on Twitter.

But the UN agency also said no country should close its borders or place any restrictions on travel or trade because of Ebola.

It had previously opted against raising the global alarm over the DRC’s Ebola outbreak on three occasions despite registering “deep concern”, with the epidemic surging amid a “perfect storm” of regional insecurity and deep community mistrust over the crisis and towards authorities.

A new case of the virus was registered in neighbouring Uganda earlier on Wednesday, fuelling concerns that the virus may be spreading beyond the DRC’s borders.

Ebola is highly infectious and spreads through bodily fluids. The current outbreak has killed 1,676 people – more than two-thirds of those who contracted it – since it emerged in eastern DRC in August 2018. Three of the deaths were recorded last month in Uganda.

‘Time for world to take notice’

Tedros Adhanom Ghebreyesus, WHO director-general, said in a statement it was “time for the world to take notice” of the epidemic and called for a redoubling of efforts to battle it back.

Tedros insisted that the declaration was not made to raise more money – even though WHO estimated “hundreds of millions” of dollars would be needed to stop the epidemic.

A public health emergency of international concern is not for fundraising, it’s for preventing the spread of disease. @WHO is not aware of any donor that has withheld funding because the emergency had not been declared. But if that was the excuse, it can no longer be used.

Before Wednesday, WHO had declared a global health emergency four times since 2007, when it first put in place the procedure: in 2009 for the flu pandemic; in 2014 for polio; in 2014 for the devastating Ebola outbreak in West Africa that killed more than 11,300; and in 2016 for the Zika virus that caused a spate of birth defects across Latin America.

It was heavily criticised for its sluggish response to the West Africa outbreak, which it repeatedly declined to declare a global emergency until the virus was spreading explosively in three countries and nearly 1,000 people were dead.

Internal documents later showed WHO held off partly out of fear a declaration would anger the countries involved and hurt their economies.

Health experts welcomed Wednesday’s declaration but urged WHO to now focus on galvanising international aid and changing “the playbook” on the ground in order to end the epidemic.

“[Otherwise] we can expect the DRC epidemic to either spin out of control or, more likely, we will have a steady drumbeat of needless suffering and death for the next year, maybe much longer,” said Lawrence Gostin, faculty director at US-based Georgetown university’s O’Neill Institute for National & Global Health Law.

Gostin also cautioned that complacency in the international community was “crippling the response”, saying the “status quo is no longer tenable”.

Wednesday’s decision came after the DRC’s health ministry on Sunday confirmed the first registered case of the virus in Goma, a city of some two million people in eastern North Kivu province and close to the border with Rwanda.

The case triggered calls for more international support amid the spectre of a rapid increase in transmission rates, but local officials appealed for calm.

At a UN meeting in Geneva on Tuesday, Oly Ilunga Kalenga, the DRC’s health minister, said the outbreak was “not a humanitarian crisis” and that the risk of Ebola spreading to other cities or regions in Congo remained the same.

Outside of the cases in Uganda and Goma, the Ebola outbreak has been confined to more rural regions of North Kivu and neighbouring Ituri province. Combined, the two provinces border Rwanda, Uganda and South Sudan.

A toxic mix of active armed groups and deep-rooted mistrust of health officials among local communities in the region have hampered efforts to halt the virus.

Unidentified attackers killed two Ebola health workers near Mukulia in North Kivu over the weekend, the latest in a string of assaults against medical personnel or health facilities.

Amid the unrest, health workers have vaccinated some 160,000 people. The vaccine is experimental but is estimated to be 97.5 percent effective and, according to WHO, may protect a person for up to 12 months.

Those working in the field have repeatedly warned the outbreak was taking a turn for the worse in recent months.

“Every day, women, men and children are dying of the Ebola virus and it is becoming too easy to forget that the ever-climbing case numbers are people,” Miller said in a statement.

“Now with the first case identified in Goma, it is crucial that we involve communities at every step in the response, building trust and collaboration and viewing them as true partners,” she added. “We can’t do this alone.”