Golunov is a reporter at Meduza, the Russian news outlet where I am investigations editor. Early in the morning on 7 June I was woken up by a call from Galina Timchenko, Meduza’s chief executive. “We’re in trouble,” she said. “Ivan has just been arrested, something to do with drugs.”

As of last Saturday, Ivan Golunov is officially the most popular personality in the Russian media, dwarfing Vladimir Putin. It feels surreal, even as I’m writing this, because Golunov is one of the humblest people I know. But since the weekend, his plight has captured the nation.

‘Ivan has been arrested,’ the Meduza chief said, ‘something to do with drugs.’ It sounded bizarre

It sounded bizarre: I’ve never seen Ivan with a drink, let alone high (he is a chain smoker of cigarettes, though). He is an adrenaline junkie, a hyper-focused sleuth who can chase leads for weeks and months on end, navigating obscure public procurement databases and land registries and coming up with detailed reports on city hall officials amassing wealth far beyond their official means, or loan sharks scamming hundreds of unsuspecting victims and forcing them out of their apartments.

It’s not the kind of stuff that gets you a Pulitzer prize or international renown, because the issues Golunov writes about are too local and obscure for a global audience. There’s nothing dramatic about his articles: they use dry, unemotional, dense reporting that only gives you a sinking feeling once you reach the end – you vaguely knew this or that industry was irreparably rotten, but you never realised exactly how much until Golunov sunk his teeth into its inner workings. That’s what gets him high: to find something that is secret, to understand how it works and to tell the world about it.

Timchenko’s call jolted me fully awake, but I wasn’t surprised. The second I heard about the charges against Golunov I knew they were fake. The police were leaking photos supposedly taken at his apartment after a search: bags of suspicious-looking powders, lab glassware, electronic scales. They were charging him with large-scale drug dealing: a charge that carries 10 to 20 years behind bars. But it wasn’t Golunov’s apartment in the pictures – his is a tidy one-bedroom flat filled with books in a nondescript Soviet housing block, not a dingy meth lab in some dungeon. 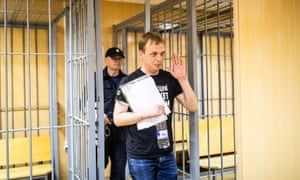 There was also a Post-it note in one of the pictures, with chemical formulas on it. It wasn’t in Golunov’s handwriting: I know because I have his notes from previous projects. The police later removed the pictures from their website and admitted they had not been taken at his apartment (leaving Putin’s spokesman, Dmitry Peskov, who cited them as evidence, red-faced). But the charges still stuck, and more lies piled on top of lies: a state TV network aired a story claiming Golunov was intoxicated at the time of his arrest – while showing a medical report that clearly stated he wasn’t (they later quietly edited the segment without any apology). While in custody Golunov was beaten, starved and denied contact with his lawyers or relatives. The lead investigator on his case only called one of his colleagues around 4am the day after his arrest, in a clear violation of his rights and the law.

‘Something almost unthinkable happened at the court hearing: the judge released him from custody but ruled he remain under house arrest until the trial.’

I had no illusions about who might be behind his arrest. Only a few hours earlier, he had filed the most recent draft of his latest investigation to me. He was digging into the Moscow funeral industry – an impossibly corrupt and criminal business, even by Russian standards. It’s a service one can’t refuse: you can’t not die (just as a megapolis like Moscow can’t help but generate millions of tons of garbage every year, which someone gets to process, for a handsome profit). Golunov found that high-ranking officials were involved in violent turf wars for control of Moscow’s most prized cemeteries – exactly the kind of people who can get bent cops to plant drugs on you. Golunov said as much at his preliminary court hearing on Saturday which ruled on the conditions of his custody before the trial. Ivan Kolpakov, Meduza’s editor in chief, vowed to finish the investigation and name those connected to his arrest.

Something almost unthinkable happened at the court hearing. The judge released him from custody but ruled he remain under house arrest until the trial – an unprecedented act of clemency for Russia, where thousands languish in remand prisons for months, sometimes years, before their trial even begins. It doesn’t matter that the evidence against Golunov was demonstrably false; it’s a political case where the judge is not the one who makes the decision. Any independent judge would have thrown the case out, but in Russia, your chances of getting out – even when fully, obviously innocent – are extremely slim: for the country’s top investigator the 0.51% acquittal rate is a matter of pride.

Kremlin says mistakes may have been made over arrest of journalist

But then another remarkable thing happened: there was a national outpouring of solidarity with Golunov that quickly became impossible to ignore. Since Saturday, people have been standing in line for hours for a chance to mount a “single picket” – the only type of protest still allowed in Russia without permission. Celebrities recorded videos in his support and petitions were signed – over 7,500 signatures from fellow journalists, including those on state-owned outlets, and a Change.org petition is nearing 200,000 signatures.

It’s probably a combination of factors: Golunov’s spotless personal and professional credentials; his undeniable service to the community; and the fact his arrest was an unmitigated PR disaster for Russia as it was unfolding at the time of the St Petersburg International Economic Forum, where Putin appeared, hoping to attract global investors. I’m sure Putin would have stopped it if he could, but you can’t arbitrarily free one victim of this system without admitting that many top-ranking officials were involved in a plan to frame an innocent man for his pursuit of truth. It’s a cruelly efficient system of intimidation and persecution, and Golunov’s case is far from the first.

But we hope this turns out to be one that finally exposes the truth.