In a stinging defeat for President Donald Trump, his administration ended its effort to add a citizenship question to the 2020 United States census, saying that it will begin printing forms that do not include the contentious query. 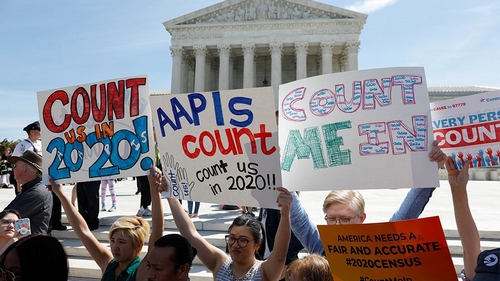 Demonstrators gather outside the US Supreme Court in Washington, DC [File: Shannon Stapleton/Reuters]

White House and Justice Department officials confirmed the decision, which came in the aftermath of a Supreme Court ruling on June 27 that faulted the Trump administration for its original attempt to add the question.

“I respect the Supreme Court but strongly disagree with its ruling regarding my decision to reinstate a citizenship question on the 2020 census,” Commerce Secretary Wilbur Ross said in a statement.

“The Census Bureau has started the process of printing the decennial questionnaires without the question. My focus, and that of the bureau and the entire department, is to conduct a complete and accurate census,” Ross said.

Although the Supreme Court left open the possibility of the administration adding the question, there was little time left for the government to come up with a new rationale.

The government had said in court filings that it needed to finalize the details of the questionnaire by the end of June.

After the ruling, Trump tweeted that he was consulting lawyers about delaying the census so that the question could be added.

Critics have called the citizenship question a Republican ploy to scare immigrants into not taking part in the population count and engineer an undercount in Democratic-leaning areas with high immigrant and Latino populations. That would benefit non-Hispanic whites and help Trump’s fellow Republicans gain seats in the US House of Representatives and state legislatures, the critics said.

“This is an enormous victory for the rule of law and the Constitution. We still have work to do to ensure a complete count, but this helps us to make sure that the government conducts this count in good faith and in compliance with the law,” Democratic US Senator Brian Schatz said in a statement.

The Trump administration has told the courts that its rationale for adding the question was to better enforce a law that protects the voting rights of racial minorities. Critics called that rationale a pretext, with the Supreme Court’s majority embracing that theory.