Saudi Arabia’s Public Investment Fund (PIF) is attracting only tepid interest in plans for its latest multibillion-dollar debt sale, banking sources told the Reuters news agency. This suggests the kingdom may be losing its appeal for some lenders. 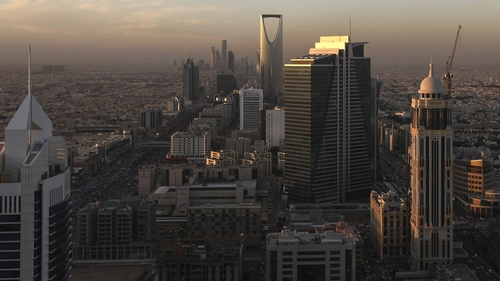 When Saudi Arabia started its borrowing spree, bankers said it was made clear in conversations that the government was asking them to lend cheaply in return for more profitable opportunities further down the line [Simon Dawson/Bloomberg]

In order to cultivate business in Saudi Arabia, some international banks have flocked to join the Saudi effort to reduce its reliance on oil. Still, Riyadh’s relations with Western allies have been strained by the murder last year of journalist Jamal Khashoggi.

Banks have queued up for relatively low-earning Saudi sovereign bonds and loans because they hope doing so could lead to more lucrative work. However, the postponement of Aramco’s planned stock market listing and a slow start to a slate of other planned privatisations is disappointing some lenders.

“Banks had been made a lot of promises, on the equity side mostly, and what is happening is just sovereign borrowing,” one banker with an international lender told Reuters.

Having raised $11bn through a syndicated five-year (term) loan in 2018, PIF now wants another $8bn (bridge) loan that it hopes to pay back one year after it sells its 70 percent stake in SABIC (Saudi Basic Industries Corp, a petrochemicals company) to Saudi Aramco.

Sources told Reuters that even though international banks took part in the PIF term loan, they are thinking twice about getting involved in a billion-dollar bridge loan if it is just about “relationship lending” and “not at commercial terms”.

Some large banks, such as HSBC and Citibank, will participate, the sources said, meaning the deal is likely to get done. But the waning interest indicates that Saudi Arabia may have to start paying higher rates for sovereign debt that is not a precursor to more profitable work.

A group of 15 lenders took part in that deal, including European, Asian and United States banks.

PIF’s new loan is expected to offer relatively low margins. One source tells Reuters he expected it to be around 30 basis points above LIBOR, adding to the lack of enthusiasm.

A PIF spokesman said the fund “does not comment on rumours or speculation regarding transactions”.

Many banks tend to establish or strengthen relationships with clients by providing relatively cheap financing in the hopes of gaining further business in areas such as trade finance or capital markets.

Saudi Arabia’s economic reforms include privatisations, large infrastructure projects, and the planned flotation of Aramco – a transaction expected to net $100bn for the state.

However, Aramco’s initial public offering has been postponed until at least 2021, and the other work expected has been slow to appear.

When Saudi Arabia started its borrowing spree, bankers said it was made clear in conversations that the government was asking them to lend cheaply in return for more profitable opportunities further down the line.

Banks with large balance sheets and a strong presence in the Middle East, such as JPMorgan Chase, have been able to lend extensively at low margins. But new borrowing requests from the Saudis are starting to fatigue medium-sized banks, sources said.

“For some European banks, which have a very high cost of funding, this is a problem. And they are feeling the pinch,” one source said.

The new PIF loan has also raised concern among potential lenders because it is unclear how the loan will be used, as it is not tied to any specific investment or acquisition.

“There’s no visibility in terms of deals and upcoming business,” one source said.

One thought on “Are lenders losing their appetite for Saudi debt?”