Senior British politicians, including both the contenders to be the next prime minister, joined journalists on Saturday in criticising police for warning media not to publish leaked government documents, saying it was a “dangerous road to tread”. 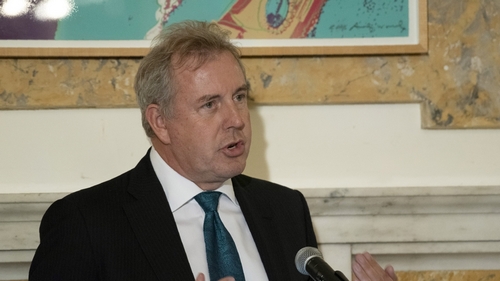 Britain’s most senior counterterrorism officer, Neil Basu, warned journalists and publishers they could be in breach of the law if further documents were leaked [File: Sait Serkan Gurbuz/AP]

Last week, a newspaper published leaked memos from the United Kingdom’s ambassador to Washington that provoked a serious diplomatic spat with United States President Donald Trump and ultimately led to the envoy announcing his resignation.

Britain’s most senior counterterrorism officer, Neil Basu, said on Friday police would investigate who was responsible. But he also warned journalists and publishers they too could be in breach of the law if further documents were leaked.

“I would advise all owners, editors and publishers of social and mainstream media not to publish leaked government documents that may already be in their possession, or which may be offered to them, and to turn them over to the police or give them back to their rightful owner, Her Majesty’s Government,” Basu said.

His comments provoked anger and criticism from journalists, editors and politicians who said it risked infringing the freedom of the press.

“The state threatening media freedom is a dangerous road to tread,” Health Minister Matt Hancock said on Twitter on Saturday.

George Osborne, the editor of the London Evening Standard and a former finance minister, described the remarks as a “very stupid and ill-advised statement from a junior officer who doesn’t appear to understand much about press freedom”.

“I cannot think of a worse example of a heavy-handed approach by the police to attempt to curtail the role of the media as a defence against the powerful and those in authority,” said Ian Murray, executive director of the Society of Editors.

“Frankly, it is the kind of approach we would expect from totalitarian regimes where the media are expected to be little more than a tame arm of the government.”

Both men battling to replace Theresa May as prime minister when she steps down on July 24 because she failed to deliver Britain’s exit from the European Union also said Basu was wrong.

Foreign Secretary Jeremy Hunt and his predecessor Boris Johnson said the leaker should be found but the press should not be targeted.

“It cannot be conceivably right that newspapers or any other media organisation publishing such material should face prosecution,” Johnson, also a former mayor of London, told an event in central England.

Hunt wrote on Twitter: “I defend to the hilt the right of the press to publish those leaks if they receive them & judge them to be in the public interest: that is their job.”

The Mail on Sunday newspaper last week published cables from Kim Darroch, the then-British ambassador to the US, in which he called the Trump administration “inept”, prompting the president to label him “very stupid” and “wacky”.

The spat has become one of the central issues of the contest for the leadership of the governing Conservative Party and the next prime minister that will be decided by about 160,000 members of the party. A diplomatic source told Reuters news agency that the lack of backing from the frontrunner, Johnson, had been a factor in Darroch’s decision to resign.

Johnson himself acknowledged his comments had been partly responsible but denied he was to blame.

Not all politicians, though, felt the police were wrong. Security Minister Ben Wallace said members of the public were bound by parts of the Official Secrets Act.

“If (journalists) are receiving stolen material they should give it back to their rightful owner and they should also be aware of the huge damage that’s already been done and the potentially even greater damage that could be done,” former Defence Minister Michael Fallon told BBC radio.

US-Iran tensions: All the latest updates