Donald Trump has arrived in the UK for a four-day visit which will feature talks with Theresa May, tea with the Queen, and mass protests including a giant Trump baby blimp being flown over Westminster.

Trump’s plane touched down at Stansted airport, in Essex, from Brussels, where he had spent two days at the Nato summit. He is due to remain in the UK until Sunday evening, when he will head to Helsinki for a summit with Vladimir Putin.

Air Force One landed at London Stansted airport at 1:51pm, with the media given no access to the president during the flight.

Trump descended from the plane holding the hand of his wife Melania, and was greeted by Liam Fox, the international trade secretary, before they boarded the helicopter Marine One for the short journey to London, most likely to the US ambassador’s residence, Winfield House.

Trump will largely avoid the capital or other cities that could host significant protests. He will instead be kept mainly insulated from the public at various country estates or palaces.

‘I think they like me a lot in the UK’, says Donald Trump – video

Earlier Trump said Brexit was heading on a different route to the one the British people expected, and the UK could end up with a closer relationship with the EU than had been predicted.

Speaking at a press conference as he prepared to leave the Nato summit for his first official visit to the UK, Trump did not explicitly call for a hard Brexit, insisting he was not interfering in the internal affairs of the UK, but his remarks were likely to disturb No 10 as it battles to shore up support for May’s proposed Brexit deal.

“I would say Brexit is Brexit,” said Trump. “The people voted to break it up so I imagine that is what they would do, but maybe they’re taking a different route. I’m not sure that’s what they voted for.”

He added that it seemed as if the UK was “getting at least partially involved back with the European Union. I’d like to see them be able to work it out so it could go quickly.”

In response, May said: “What we are doing is delivering on the vote of the British people.”

Trump said he had been reading up closely on Brexit in recent days, and he described the UK as “a pretty hot spot with many resignations”.

He had already described the UK as a country in turmoil, and held back from endorsing May’s leadership, instead praising the former foreign secretary Boris Johnson, who resigned on Monday in protest at the Brexit deal May presented to the cabinet at her Chequers retreat at the weekend.

Trump also said he had told EU leaders they had to be careful because immigration was “taking over Europe”, and this had been the reason for Brexit. He said he would be taking on the EU later this month by demanding a change to trade tariffs under the threat of imposing controls on German car exports to the US.

He insisted he was popular in the UK, citing his strong line on migration. “They like me a lot in the UK. I think they agree with me on immigration.”

A Guardian/ICM poll released on Wednesday showed 53% of respondents disagreed with the idea Trump was doing a good job, and 63% disagreed with the statement that they would like to see a politician like him as British prime minister.

As Trump prepared to arrive in the UK on Thursday a spoof “go home” van – a parody of widely criticised Home Office vans carrying messages directed at illegal immigrants – was being driven around central London. The message on the side the van, supported by the campaign groups Another Europe is Possible and Global Justice Now, stated: “Go home or face protest.” 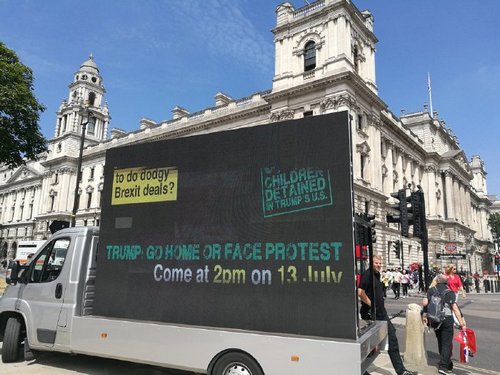 Almost as the plane landed, a banner reading: “Donald Trump: Human Rights Nightmare” was unfurled by Amnesty UK on Vauxhall Bridge, opposite the US Embassy.

Later on Thursday Trump will attend a black-tie dinner at Blenheim Palace in Oxfordshire along with business leaders and most of the senior members of the cabinet.

On Friday he will join May for a counter-terrorism demonstration by UK and US special forces at an undisclosed location, before the main business element of his trip: talks with May and the new foreign secretary, Jeremy Hunt, at the PM’s Chequers country retreat, including a working lunch.

Later on Friday Trump and his wife, Melania, who will spend some of her time on separate engagements with May’s husband, Philip, will have tea with the Queen at Windsor Castle. They will then fly to Scotland.

Trump’s 48 hours in Scotland are officially part of his visit, and he will be greeted on arrival by the Scotland secretary, David Mundell, but he has no official engagements there and is expected to stay at one of his golf resorts, playing golf and preparing for a meeting with Vladimir Putin in Helsinki.

“I am going there for two days while I wait for the Monday meeting,” Trump said of the Scottish leg of his trip at his Nato press conference.

Protests against Trump’s visit are expected across the country. There will be an “unwelcome party” near Winfield House and a protest near Downing Street on Thursday. On Friday a women’s march will head to Portland Square before the main Stop Trump protest, ending with a rally in Trafalgar Square. There are also expected to be protests in Glasgow and Manchester.

Much of the media attention has focused on a 20ft balloon caricaturing the US president as a nappy-clad orange baby with a smartphone. The London mayor, Sadiq Khan’s decision to allow the inflatable to fly next to the Houses of Parliament has enraged some Trump supporters, with Nigel Farage describing it as “the biggest insult to a sitting US president ever”.

It is officially a working visit. Plans for a full state visit – an offer extended by May when she visited Trump soon after his inauguration in 2017 – were shelved indefinitely amid concerns about protests. But May and her ministers still hope to flatter Trump with pomp and royalty.

One of the obstacles to a state visit had been objections to Trump addressing parliament, a traditional element of such trips, including a controversial ban by the Commons Speaker, John Bercow.

However, some MPs will be presenting another view. The rightwing thinktank Bow Group has organised a welcome event for Trump in parliament on Thursday, even though the president will get no nearer than the US ambassador’s residence, four miles to the north in Regent’s Park.

Tell us: how are you are marking Donald Trump’s UK visit?

Whether you are joining a planned demonstration or marking Trump’s UK visit in some other way, share your story and photographs via our dedicated callout here.

You can also share your stories, photos and videos with the Guardian via WhatsApp by adding the contact +44(0)7867825056

Your responses will only be seen by the Guardian and we’ll feature some of your contributions in our reporting. You can read terms of service here. 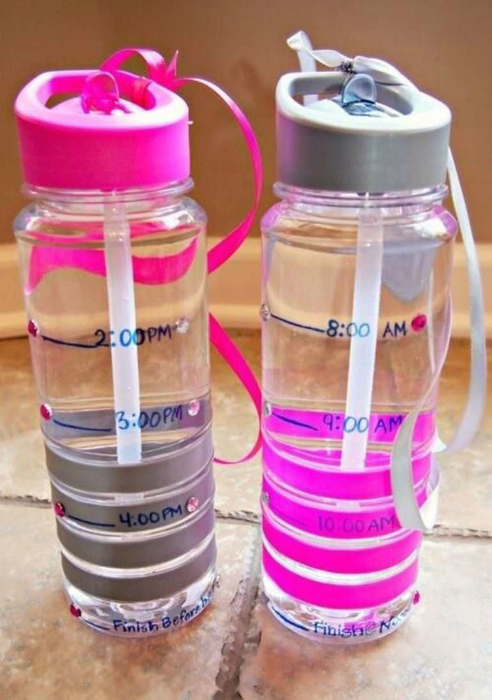