The United States have beaten England 2-1 to secure a place in the FIFA Women’s World Cup final, moving a step closer to defending their title. 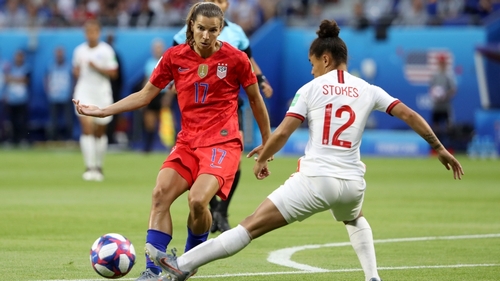 The three-time World Cup winners on Tuesday continued their fine form, having won their last 11 matches on the trot.

The US began the game at France’s Stade de Lyon strongly, with Christen Press, on for the injured Megan Rapinoe, heading in the first goal after 10 minutes.

Ellen White pulled England level before 20 minutes had passed, but US captain Alex Morgan – looking to celebrate her 30th birthday in style – headed the defending champions back in front in the 31st minute.

England captain Steph Houghton squandered a chance to pull her team level in the 84th minute after her tame penalty was saved by US goalkeeper Alyssa Naeher.

England’s women have now lost three straight semi-finals in major tournaments following defeat to Japan in the 2015 World Cup in Canada and the loss to the Netherlands in Euro 2017.

In his post-match interview, England coach Phil Neville was gracious in accepting defeat, wishing the US side good luck in the final and saying “they know what it takes to win football matches”.

“The aim is for us to become the best, like America. We’ve still got a bit to go, but I won’t stop until we get there,” Neville said.

For her part, US manager Jill Ellis said her team was focused on winning the team’s fourth title, which would also be her second.

“We are here for one thing: to win the trophy,” she told reporters.

Oranje versus the Blue and Yellow

The US will face the winner of Wednesday’s match between the Netherlands and Sweden in Sunday’s final.

Ranked as number nine in the world, Sweden’s Blue and Yellow are one place behind the Netherlands squad.

While this is the first time the Dutch have reached the semi-final, the Oranje – also known as Leeuwinnen (the Lionesses) are the reigning European champions, after beating Denmark in the 2017 final on home soil.

All eyes will be trained on Dutch player Vivianne Miedema, who at only 22 years old, is the Netherlands’ all-time leading goal scorer with 61 goals for her country.

“I think we surprised everyone by going this far, including ourselves,” the Arsenal striker told FIFA’s website on Tuesday.

Sweden, who have not lifted silverware since the 1984 European Competition for Women’s Football, have reached the final of a World Cup once, losing to the US in 2003.

The Swedes knocked out Germany, the tournament’s second favourites, with a 2-1 shock comeback win in the quarterfinals.

The final will be on Sunday at the Parc Olympique Lyonnais in Decines-Charpieu at 17:00 GMT.