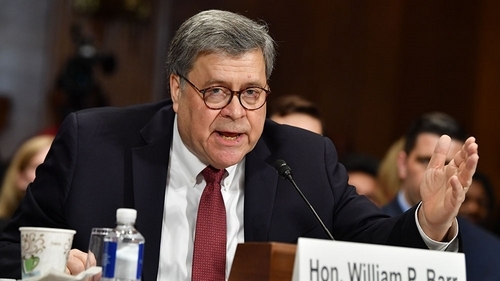 Washington, DC – Escalating a battle with US President Donald Trump, the House of Representatives voted 229 to 191 on Tuesday to authorise civil lawsuits against Trump administration officials who refuse to comply with congressional subpoenas.

“We need answers on many questions left unanswered by the Mueller report which makes clear that the Russians waged an all-out attack on our democracy, and documented – the Mueller report did – 11 instances of obstruction of justice from the White House itself,” House Speaker Nancy Pelosi said in remarks on the House floor.

In a rare compromise on Monday, Nadler said he would hold off on suing Barr for now after the Department of Justice agreed to hand over some key underlying evidence from Mueller’s report.

Nadler said he would give the Justice Department time to comply, but “if important information is held back, then we will have no choice but to enforce our subpoena in court and consider other remedies”.

The panel chairman told reporters later on Tuesday, however, that he would move as quickly as possible to go to court to force McGahn to comply with the committee’s subpoena.

“Given the current political climate and the level of issues that are at stake I suspect that the judges to whom these cases are assigned will move with absolute alacrity,” Gene Rossi, a former federal prosecutor now in private practice with a Washington law firm, previously told Al Jazeera.

Republicans criticised the Democrat’s measure Tuesday as simply a political effort to damage Trump heading to the 2020 presidential election.

“Fundamentally, it is an impeachment effort in everything but name,” House Minority Leader Kevin McCarthy said.

Tuesday’s vote comes as House Democrats attempt to keep a focus on the Mueller report which was released in a redacted form by Barr in April. Several House committees have been investigating Trump as calls for impeachment proceedings against the president grow among Democratic rank-and-file members of Congress.

Democrats on the House Oversight Committee plan to vote on Wednesday to hold Barr and Secretary of Commerce Wilbur Ross in contempt for refusing to comply with subpoenas related to Trump’s plan to use a citizenship question on the 2020 US census.

“In all of our investigations the White House has not produced a single shred of paper,” Representative Elijah Cummings said. “Over and over again, it does not matter what the topic is, the tactics are the same.”

The House Intelligence Committee will continue looking into the Mueller probe on Wednesday with a hearing on the counterintelligence implications of Russian interference in the 2016 elections.

The House Judiciary Committee has also issued subpoenas to Hope Hicks, Trump’s former White House director of communications and to Annie Donaldson, who was McGahn’s secretary and who provided extensive testimony to Mueller. Both have been told by Trump’s White House lawyers not to testify.

According to a redacted version of Mueller’s report, the special counsel found that although Trump’s campaign had multiple contacts with Russian officials, there was insufficient evidence to establish criminal conspiracy.

Mueller outlined a number of instances in which Trump, who has repeatedly called the investigation a “witch-hunt”, attempted to interfere with the investigation. Barr and former Deputy Attorney General Rod Rosenstein subsequently determined Trump had not broken the law.

Dean told the House panel that Mueller has provided a “roadmap” for investigating Trump, adding that he sees parallels between the circumstances surrounding Trump and those surrounding Nixon in the 1970s.

Apple plans to use iPhone as a passport