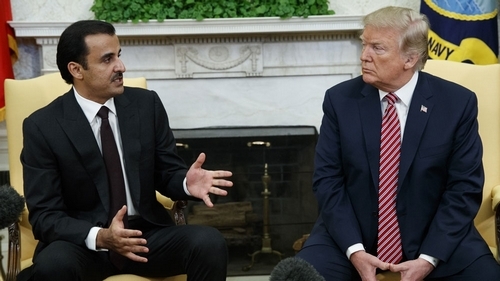 The emir will meet Trump in Washington on July 9 for talks on regional politics, security and counterterrorism cooperation, according to the announcement on Friday, which came amid a US effort to build pressure on Gulf power, Iran.

“The visit will build on the long-standing partnership between the United States and Qatar and further strengthen our already substantial economic and security ties,” the White House said.

Washington has sought to keep up relations with Qatar, an oil-and-gas rich state, which has maintained cordial relations with Tehran even as other Gulf states led by Saudi Arabia have cooperated with Trump’s “maximum pressure” campaign against Iran.

For two years, Saudi Arabia and its allies – the United Arab Emirates, Bahrain and Egypt – have barred Qatari flights from their airports and airspace, banned most Qatari visitors, cut trade and shipping links, and closed their borders.

Washington was less than enthusiastic about the embargo on Qatar, which hosts two US military bases and the forward headquarters of the US Central Command that oversees the Pentagon’s operations across the Middle East.

Qatar is also slated to take part in the June 25-26 Bahrain conference on the Trump administration’s Israeli-Palestinian peace initiative.

The bilateral meeting will be the first between the leaders since Trump hosted Sheikh Tamim at the White House in April last year.