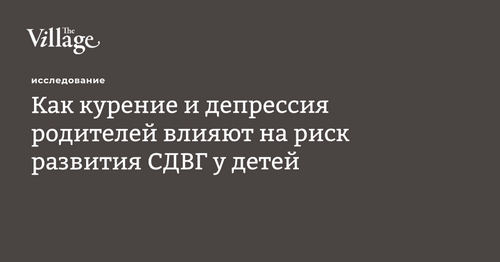 Korean researchers found that the risk of developing ADHD (attention deficit and hyperactivity disorder) in children is significantly influenced by the factors of life of their parents, including depression and Smoking. Article published in the journal Asia-Pacific Psychiatry.

A group of specialists under the leadership of Jin-Won Kwon from Censusscope national University examined data on 23 561 child and adolescent under 18 years with diagnosed ADHD, as well as information about the health and lifestyle of their parents socio-economic status, place of residence, obesity, Smoking and depression.

Syndrome diagnosed six times more often in children, at least one of whose parents suffered from depression. In addition, children whose parents smoked more than 15 cigarettes per day, the risk of developing ADHD was 60% higher than those who smoked less.

Experts analyzed, it is customary in the family to smoke at home or with the children, and concluded that the impact of passive Smoking on the development of ADHD in children was insignificant. According to them, from 2005 to 2014, the number of children and adolescents suffering from the syndrome has increased about four times. 79.5% of children diagnosed with the syndrome, were older than ten years.

The study authors noted that health care organizations should warn parents about the possible impact of some aspects of their lives to the mental health of the child. Data metascheduling showthat the symptoms of ADHD experienced more than three percent of all people on the planet.