Vladimir Kolokoltsev, the interior minister, said the decision had been taken because of a lack of evidence. Police said he would be released from house arrest later on Tuesday. Golunov, 36, had faced up to 20 years in prison in what was widely seen as a bid to silence his hard-hitting reports on corruption. 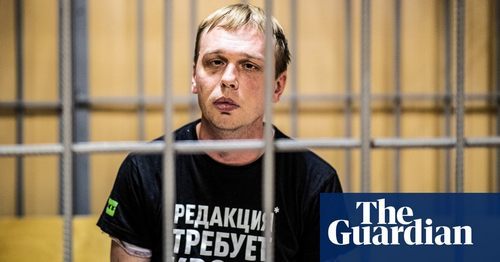 Russian police have dropped all charges of drug dealing against Ivan Golunov, an investigative reporter whose arrest caused a major public outcry.

The unexpected move came after an unprecedented display of support from Russian journalists and cultural figures.

Golunov, who works for the Latvia-based Meduza news website, was beaten by police and kept in custody for 12 hours after being detained in central Moscow on 6 June, his lawyer, Sergei Badamshin said.

Some police officers involved in the case were being temporarily removed from duty pending an investigation, the interior minister said, adding that he planned to ask President Vladimir Putin to dismiss other more senior police personnel.

“I believe that the rights of every citizen, regardless of his profession, must be protected,” said Kolokoltsev.

Before the police backed down, nearly 25,000 people had signed up to a Facebook page expressing their intention to take part in a protest march on Wednesday in solidarity with Golunov.

Valentina Matviyenko, the speaker of the Russian parliament’s upper house and a longtime ally of Putin, became the most influential figure to defend the journalist on Tuesday.

“This a very bad story,” he said. “There are many questions that the public must receive clear and intelligible answers to. This is either unprofessionalism, recklessness or a provocation.”

Matviyenko, who is nominally the third most powerful politician in Russia, said the case had been taken under the personal control of Yury Chaika, the prosecutor general.

The Kremlin admitted on Monday that mistakes had possibly been made in the handling of the case.

The police’s case against Golunov appeared flimsy. Badamshin said forensic tests had not detected the journalist’s fingerprints on the bags of drugs purportedly seized from his home. Previous tests failed to reveal traces of drugs in either the journalist’s urine or on his fingers.

Shortly after his arrest, police published photographs that they said showed a drug lab at his rented flat. The images were swiftly deleted from the interior ministry’s website after a police spokesman admitted they had been taken at a different location and bore no relation to the charges against the journalist.

Golunov’s treatment was condemned by figures across a wide spectrum of Russian society, including Kremlin-loyal media. Dozens of journalists from state news agencies signed an open letter calling for the charges against him to be dismissed. Presenters on Channel One, state media’s flagship channel, also demanded a transparent investigation into the case.

Dmitry Peskov, the Kremlin spokesman, denied media reports that the government was seeking to settle the Golunov case before Putin’s annual question-and-answer show with the public on 20 June.

The Russian investigative media outlet Project cited unnamed Kremlin officials on Monday as saying the presidential administration wanted police to drop charges against Golunov because they were worried Putin would face awkward questions during the live call-in show.