Before the vote, Representative John Lewis, a Democrat and civil rights leader who marched with Martin Luther King Jr in the 1960s, called on members of Congress to “do the right thing” and condemn the president’s words. 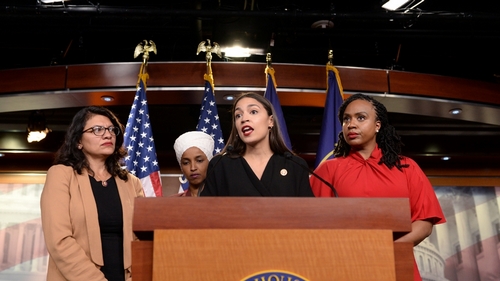 Washington, DC – The US House of Representatives voted on Tuesday to condemn President Donald Trump’s racist tweets against four Democratic congresswomen of colour.

“The world is watching. They are shocked and dismayed because it seems we have lost our way as a proud and dignified people,” the 79-year-old Lewis said.

The House resolution passed by a vote of 240-187 with only four Republicans joining all Democrats and one Independent in favour. The text “strongly condemns President Donald Trump’s racist comments that have legitimised and increased fear and hatred of new Americans and people of colour”.

Trump tweeted on Sunday that four congresswomen of colour who have been critical of his harsh immigration policies should just “go back” to where they came from.

Alexandria Ocasio-Cortez, Ilhan Omar, Ayanna Pressley and Rashida Tlaib, some of whom he has repeatedly railed against in the past, are US citizens and all except for Omar were born in the United States.

The commentary sparked an immediate backlash in US public debate culminating in Tuesday’s symbolic vote to condemn the president’s words.

“Sadly, this is not first nor will it be the last time we hear disgusting, bigoted language from the president,” Tlaib said on Monday.

Debate over the House resolution was tense and at times chaotic with the Speaker of the House Nancy Pelosi calling the president’s words “racist” and Republicans using parliamentary tactics to try to strike down her statement.

“His comments from the White House are disgraceful and disgusting and his comments are racist,” Pelosi said.

Pelosi’s words were judged out of order by the House parliamentarian, a violation of rules governing debate and decorum, but a majority of Democrats voted to reject Republican demands her comments be struck from the record. It was the first time since 1985 that a House speaker’s words were challenged from the floor.

The ruling that Pelosi could not directly call Trump’s tweets “racist” was shock to Representative Emanuel Cleaver, a Democrat and an African American, who was presiding over the chamber. Cleaver put down the gavel and simply said “I abandon the chair.” Order was not restored until Representative Steny Hoyer, the number two House Democrat leader, took over.

Representative Al Green, a Democrat who is leading a push to begin impeachment proceedings against Trump, said he empathised with Cleaver’s reaction.

“I remember the ‘go back to Africa’ language that was commonplace in this country. I am a son of the segregated South. I had to go to back doors, drink out of coloured water fountains, sit at the back of the movie the back of the bus,” Green, who is 71, told Al Jazeera.

“When I hear that language, I remember all of these things,” Green added.

Shortly after the vote Green introduced articles of impeachment against Trump, potentially forcing a vote this week on whether to remove the president from office. Democratic leadership has so far resisted launching official impeachment proceedings, instead urging patience as Democrats conduct a number of investigations surrounding Trump.

Ahead of Tuesday’s vote, Democrats said they saw an intentional political strategy in Trump’s tactics aimed at motivating right-wing voters he would need to win reelection in 2020 and rallying support for his detention of migrants at the US border with Mexico.

“He is being intentionally, provocatively, pro-actively racist and xenophobic in order to embolden his base but divide the country in horrible ways,” Democrat Peter DeFazio told Al Jazeera.

‘We won’t be silenced’

The four congresswomen held a press conference on Monday to respond as a group to the president’s remarks.

“We will not be silenced,” Pressley told reporters. “This is simply a disruption, a distraction from the callous, chaotic and corrupt culture of this administration.”

Trump then doubled down on his remarks early Tuesday in a new round of tweets saying, “I don’t have a Racist bone in my body”. He again attacked the four congresswomen suggesting the House should instead vote “to rebuke the filthy and hate laced things” the four have said in the past.

Ocasio-Cortez responded on Twitter, saying, “You’re right, Mr President – you don’t have a racist bone in your body. You have a racist mind in your head and a racist heart in your chest.”

As reflected in the vote, most Democrats have strongly condemned the remarks and most Republicans have remained silent on the president’s tweets, although some came to Trump’s defence on Tuesday.

Apple plans to use iPhone as a passport