The United Arab Emirates (UAE) has denied ownership of weapons found in Libya after a senior US senator demanded an investigation of reports that American-made missiles were seized at a base belonging to renegade military commander Khalifa Haftar. 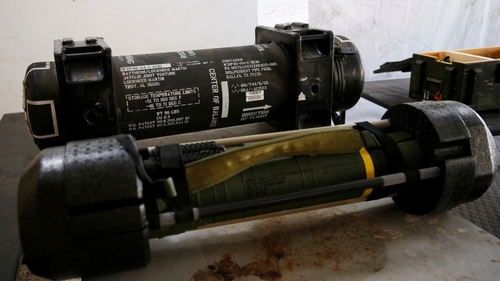 The UAE’s Ministry of Foreign Affairs issued the denial in a statement on Tuesday, adding that Abu Dhabi reaffirmed its commitment to the UN Security Council’s arms embargo on Libya.

“The UAE also urges all parties to de-escalate tensions and to re-engage in the UN’s political process,” the statement said.

The announcement came after Libyan troops loyal to the internationally recognised Government of National Accord (GNA) last week said they discovered a cache of US-made weapons at a captured base in the mountains south of the capital, Tripoli.

The seized weapons included a number of Javelin anti-tank missiles, GNA military spokesman Mohammed Qununu said, with markings on the missiles’ shipping containers stating they belonged to the “Armed Forces of the United Arab Emirates”.

Libyan media also aired footage that appeared to show markings indicating the US-made weapons were originally sold to the UAE – a major buyer of American arms and one of Haftar’s main international supporters – in 2008.

On Monday, US Senator Bob Menendez called on Washington to investigate the reports in a letter sent to US Secretary of State Mike Pompeo.

“If the United Arab Emirates has indeed transferred these weapons, this would appear to be a serious violation of United States law. Such a transfer would also almost certainly be a violation of the UN arms embargo on Libya,” wrote Menendez.

“As you are surely aware, the United States has invested significant political, diplomatic and assistance resources to support the civilian-led, UN and internationally recognised Government of National Accord,” Menendez added.

Officials at the US State Department and Pentagon said last week they opened probes to determine how the US-manufactured weapons ended up in Libya.

A spokesperson from the US State Department said in a statement sent to Al Jazeera: “We take all allegations of misuse of US origin defence articles very seriously.”

It added: “We are aware of these reports and we are seeking additional information. We expect all recipients of US origin defence equipment to abide by the end-use obligations.”

Haftar and his backers say they are trying to free Tripoli from militias that they accuse of destabilising Libya since the fall of Muammar Gaddafi in a NATO-backed uprising in 2011.

His critics, however, accuse him of trying to seize power from the GNA through force and deepening a conflict between factions based in the east and west of the sprawling North African country.

UN reports previously said the UAE and Egypt have armed Haftar’s Libya National Army since 2014, but details have been unclear.

Libya has been under a UN arms embargo since 2011, however, the government is allowed to import weapons and related material with the approval of a UN Security Council committee.