Al-Bashir, who lost power in a military coup in April and was immediately arrested by the transitional authorities, is wanted by the ICC on charges, which he denies, of crimes against humanity and genocide relating to abuses by Sudanese forces in Darfur between 2003 and 2008. The Hague-based tribunal issued warrants for his arrest in 2009 and 2010.

Bensouda: ‘Now is the time for the people of Sudan to choose law over impunity’ [File: Bas Czerwinski/AP]

Speaking in New York, ICC chief prosecutor Fatou Bensouda said that “circumstances have changed dramatically” in the wake of the coup and now the victims of historic abuses in Darfur had a shot at getting justice.

“The former status quo is over. Mr Omar al-Bashir has been deposed, arrested, detained and charged with domestic offences,” Bensouda told the UN’s 15-member Security Council.

“Sudan remains under a legal obligation to transfer these suspects to the ICC to stand trial unless it can demonstrate to the judges of the ICC that it is willing and able to genuinely prosecute them for the same cases.”

Bensouda also called on the TMC to hand over four other suspects wanted over the Darfur atrocities, including Ahmad Harun, a former state interior minister, and Abdel Raheem Hussein, an ex-Darfur envoy, who have also reportedly been detained in Khartoum.

The two other suspects – Ali Kushayb and Abdallah Banda, who both led militia groups during the Darfur atrocities – were still “at large” and should be arrested and handed over to the ICC soonest, Bensouda said.

“I have a clear message to convey: now is the time to act. Now is the time for the people of Sudan to choose law over impunity and ensure that the ICC suspects in the Darfur situation finally face justice in a court of law.”

Bensouda acknowledged the “complexity and fluidity of the events unfolding in Sudan” but called on officials there to help her visit Sudan and the Darfur region “in the very near future to resolve these issues”. 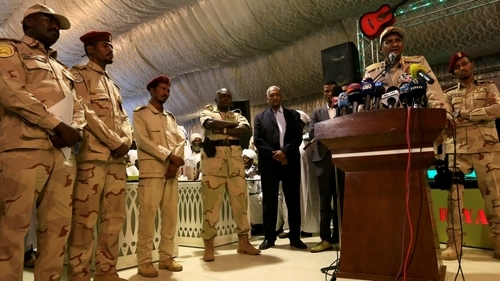 She also blasted the June 3 crackdown on a protest camp in the capital that led to dozens of pro-democracy demonstrators being killed, noting how the paramilitary Rapid Support Forces (RSF) that protesters blamed for the massacre had grown out of the Janjaweed militia that perpetrated atrocities in Darfur. The head of the RSF, Mohamed Hamdan Dagalo, better known as Hemeti, is also the deputy head of the TMC and the man seen by many as the key player today in Sudanese politics.

“It is imperative that allegations of violence against civilians, including sexual and gender-based violence, are promptly and effectively investigated by the Sudanese authorities, and that those responsible are brought to justice,” Bensouda said.

According to the United Nations, as many as 300,000 people died from fighting in Darfur, where the government and the Janjaweed militia have battled rebel groups and suppressed the minority non-Arab population.

While in power, al-Bashir evaded the ICC warrant and even travelled to South Africa, Jordan and other countries without being arrested, but his removal in April revived hopes that he would ultimately answer for atrocities in Darfur.

On April 11, Sudan’s military overthrew and detained al-Bashir, ending his three-decade rule. This followed months of street protests against his autocratic rule, including the sit-in outside the army headquarters in Khartoum. Protesters demanding a swift transition to a civilian-led administration remained at the protest camp until its bloody dispersal on June 3. 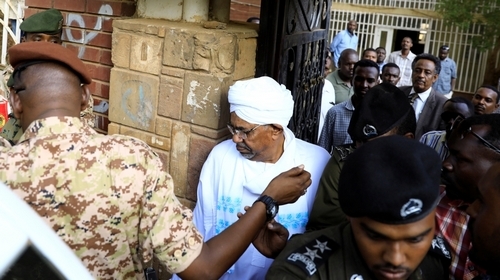 On Sunday, al-Bashir appeared for the first time in public since his overthrow, as he was escorted under heavy guard from a maximum security prison in Khartoum to the office of the prosecutor.

Prosecutors have also indicated more allegations to come relating to money laundering, financing “terrorism” and “ordering the killing of protesters”.

None of the charges by Sudanese authorities relate to Darfur atrocities.

This month, the UK-based human rights group Amnesty International reported that militias backed by Sudanese government forces were still committing atrocities – such as killings, rape and looting – in Darfur until as recently as February.