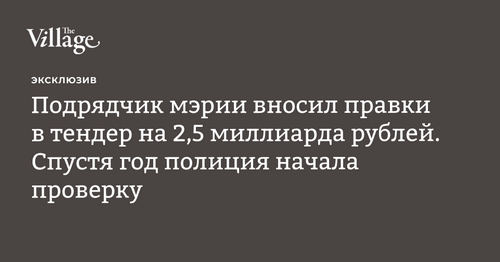 The Department of economic security and combating corruption of the Department of internal Affairs on TSAO Moscow has started preliminary examination on the fact of publication to The Village. About it the correspondent said the Colonel Sergey Amosenok.

In October 2017, The Village found that the Director of landscaping “Europark” Yuri Toderas rules of tender, the Moscow mayor’s office on greening the city for 2.5 billion rubles on the program “My street”. As a result the company “Europark” and won the contest. After that, the party “the Apple” has addressed in law enforcement bodies with the requirement to bring criminal case under article “Abuse of office”

Amosenok explained that the statement was already in the FSB and the Prosecutor’s office, but now it came to the interior Ministry. He also invited the author to the Department to give written explanations.