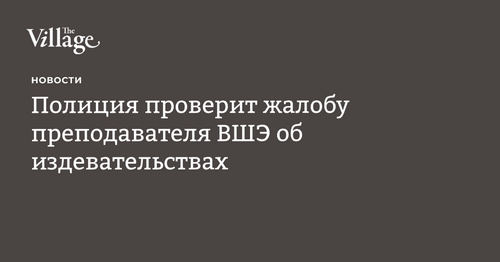 Teacher, HSE Vladimir Brodsky complained to the Prosecutor’s office and the interior Ministry, which he was subjected to harassment by three policemen. Transport police have launched an official investigation.

Details about this situation Brodsky said on his page in Facebook. According to him, the evening of 3 August, about the Yaroslavl station by three men in civilian clothes, posing as employees of Criminal investigation Department took him to the police station for verification of documents.

He was in the basement, where it was locked. Staff did not provide witnesses and in a rude and threatening manner demanded that teacher be removed from the pockets personal belongings. They took his wallet, looked through personal photos on the phone, reading correspondence in social networks and forced to strip naked.

Not finding anything forbidden Brodsky, the police let him go. Scan after the communication is also the beginning of the transport Prosecutor’s office.

How the right is defending Roseanne Barr’s racist tweets

Barry Chuckle, one half of Chuckle Brothers duo, dies aged 73