As the new Duke and Duchess of Sussex get ready for an evening of celebrations (and the rest of us wonder if the Duke of Cambridge will say anything crass in his best man’s speech), we’re wrapping up our live coverage of the day. If you spent your day at the annual European Republic convention you can catch up on all the excitement with Caroline Davies’s report.

There’s lots more across the Guardian, including Afua Hirsch on how the wedding celebrated blackness, Jess Cartner-Morley on the “long, cool glass of water” that was the dress, and Martin Belam’s summary of the most entertaining moments of the day. Or you could watch (and read) Bishop Michael Curry’s captivating sermon.

Thanks for following it all with Haroon Siddique, Sarah Marsh and a cast of thousands, and if you’re travelling home from Windsor, good luck!

We will shortly be closing the live blog – thanks to all those who have been following it.

Prince Charles was behind the choice of wedding gospel music, according to the choir leader.

Karen Gibson, founder and director of the Kingdom Choir, which performed during the wedding, said Charles’s office first approached her about the group of singers taking part in the wedding.

She added: “The couple were very intentional about what they wanted sung and how they wanted it sung, but the actual idea came from Prince Charles.”

Speaking about how the music performed at the wedding mirrored modern culture, she said: “We live in a multicultural society, so we had classical music, contemporary classical music as well and gospel music, because you’ve got many cultures living here so it’s reflective of what society looks like today.”

Sheku Kanneh-Mason, a rising star of the classical music world, played three moving pieces as the couple signed the register. He said: “It was such an amazing experience, actually, and something that I’ll remember for a long time.”

Kanneh-Mason said Meghan and Harry had requested an arrangement of Ave Maria, and recalled being at the chapel with the couple a few weeks ago to see what the cello would sound like.

“It was great for them to hear and get a feeling of what it would be like,” he said, adding that the newlyweds were “lovely people”.

The evening wedding reception, hosted by the Prince of Wales, will be held at Frogmore House in Windsor. The 17th-century English country house stands in the home park of Windsor Castle and is part of the crown estate.

The event will be a private affair and the newlyweds’ closest friends are expected to attend, allowing the guests to relax and celebrate with the happy couple.

Oprah Winfrey has thanked the fashion designer Stella McCartney and her team for working all night to get her dress finished because she realised on Friday morning that the beige dress she was planning to wear to the ceremony would photograph too “white” for a wedding.

She said: “[Stella McCartney’s] team did this overnite. Hat is vintage philiptreacy been in my closet since 2005 with new feathers. OMG was this an extraordinary day! Harry&Meghan RoyalWedding Lovedeveryminute”.

Kensington Palace said that Meghan would be speaking at the evening reception, not the lunchtime reception as it had mistakenly announced earlier.

Emma Dent Coad, the Labour MP whose constituency covers Kensington Palace and the burnt-out remains of Grenfell Tower, told the Republic convention that the royal family should do more to highlight inequality in her borough.

Dent Coad, who is also a councillor in Kensington and Chelsea, pointed out that her ward was the joint poorest in London. “What does Diana’s youngest son think of that?” she asked the convention.

She also claimed the royal family had done virtually nothing for those who survived the Grenfell fire. She said:

100 families are still stuck in hotels with some children regressing with appalling mental health and dropping out of school and university. Grenfell has had visits from the royals, and it is very sweet of them to come, but it hasn’t helped at all around Grenfell.

She added: “They are not allowed to be political. All they are allowed to do is wear beautiful clothes and be nice to people, which doesn’t work for me.”

I’m more impressed by the charity work by local celebrities we have seen at Grenfell, who have arrived in limousines rolled up their sleeves and scrubbed the toilets out for an entire day. I won’t tell you who that was, but it was a very famous singer.

But Dent Coad said survivors of the fire did not want charity from royals or celebrities. She said: “It is the most unequal borough in Britain and most people who are just struggling to keep going don’t want charity, they want their dues, they want their fair share, they want decent wages so they can pay their bills and put food on the table. They want justice, not charity.”

Responding to a question from the audience about converting Buckingham Palace into accommodation for homeless people, Dent Coad said: “I think that’s a lovely idea.”

She pointed out that the palace includes 80 bedrooms and a further 100 or more staff bedrooms. But Dent Coad said the priority should be freeing up 1,600 empty homes in Kensington and Chelsea.

Labour MP Emma Dent Coad says the royal family have done virtually nothing for the survivors of the Grenfell tower fire @RepublicStaff pic.twitter.com/1rcsxtw2kG

It is customary to be clean-shaven when dressed in army uniform, but Prince Harry was given special permission by the Queen to sport facial hair while in the frock coat uniform of the Blues and Royals.

In a statement, Kensington Palace said: “Her Majesty the Queen gave her permission for Prince Harry to get married in his uniform.” It is understood that the permission covered the fact Harry has a beard.

The historian Hugo Vickers said the permission may also have been granted because Harry had retired from active service. British army rules do not usually allow beards, except in rare circumstances, such as because of skin complaints or for religious reasons.

If you are not gripped by the wedding of Prince Harry and Meghan Markle at Windsor Castle, you are not the only one. The BBC newsreader Simon McCoy has a nice line in sarcasm when it comes to breaking “news” from the royal family.

Is anyone less enthusiastic about the royals than BBC presenter Simon McCoy? – video

The celebrity gossip website TMZ has claimed that Sir Elton John performed Your Song at the lunchtime wedding reception.

The singer was asked by the bridegroom to perform, according to Kensington Palace, though it gave no other details on the performance.

It said in a statement: “Sir Elton performed for the newly married couple in recognition of the close connection he has with Prince Harry and his family.”

The star was in attendance at Windsor Castle’s St George’s Chapel earlier with his husband, David Furnish. He was spotted ahead of the service talking to David and Victoria Beckham.

Victoria Beckham has sent the royal couple her best wishes in an Instagram post after joining the celebrations at Windsor Castle with her husband, David. She wrote:

Here are a selection of the most frequently asked searches related to the royal wedding, according to Google:

Q. How did Harry and Meghan meet?
A. They were set up on a blind date by a mutual friend two years ago.

Q. How long have Harry and Meghan been together?
A. Their relationship began soon after their first date. They announced their engagement in November 2017.

Q. What will Meghan Markle’s title be?
A. She is now known as Her Royal Highness the Duchess of Sussex. She also holds the titles the Countess of Dumbarton and Baroness Kilkeel.

Q. What is a fascinator?
A. The headwear is a common sight for women at weddings in England.

Graham Smith, chief executive of the anti-monarchy group Republic, has defended hosting the annual European Republic convention on the same day as the wedding.

In his speech to the conference, he said: “It is the best day to being doing this conference because everybody, not just republicans, are thinking about the monarchy. This event is a chance to tell the media to think about the monarchy differently and see it as politics, not entertainment.”

He said Republic’s message to the media was to “stop treating the monarchy as something that is uncontested and unchallenged”.

He added: “There was a recent poll which found that it was now a minority among 18- to 34-year-olds who support the continuation of the monarchy. Whether that poll holds up I don’t know, but it gives us hope for the future.”

Closing his speech, he said: “We know we are not yet a nation of republicans, but we are definitely not a nation of royalists, either. And everything is to play for.”

Graham Smith head of @RepublicStaff ‘we are not yet a nation of republicans but we are definitely not a nation of royalist either. Everything is to play for.’ pic.twitter.com/WdcBOe7uXE

British Transport Police tweeted to tell people to stagger their journeys home from Windsor but said queues for both stations in the area were long but moving.

Please stagger your journey home if you can and there are buses running from Alexandra Gardens to Slough ?

We’re there if you need us! pic.twitter.com/Ui4ZHe9qTC

In Scotland, communities have been celebrating the royal wedding with events ranging from garden parties to afternoon teas.

Thousands watched the marriage of Prince Harry and Meghan Markle, with a screening taking place on the Royal Mile in Edinburgh. 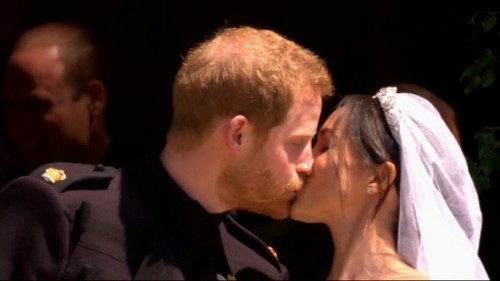