On June 20, World Refugee Day, TripAdvisor CEO Stephen Kaufer published an op-ed urging businesses to help address the global refugee crisis and pledging to donate millions of dollars to humanitarian organisations “to support and help refugees rebuild their lives and reclaim their futures”. 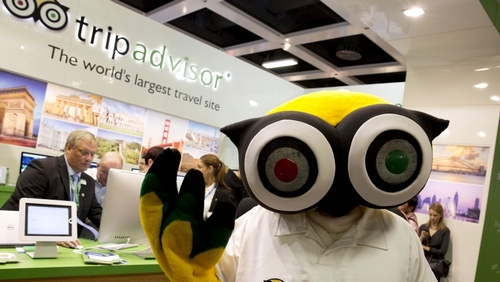 A mascot of TripAdvisor is seen at its stand at the International Tourism Trade Fair in Berlin on March 4, 2015 [File: Reuters/Axel Schmidt]

This is, of course, a commendable initiative, if only it did not contradict in spirit other practices of the company. While TripAdvisor has decided to help refugees in certain parts of the world, elsewhere – namely in the occupied Palestinian territories – it is contributing to the suffering of the local population, which itself is the source of one of the world’s largest refugee communities.

Over the past seven decades, Israel’s ruthless policies of land confiscation, illegal settlement and dispossession, coupled with rampant discrimination, have inflicted immense misery among the Palestinians, depriving them of their basic rights. TripAdvisor has also played a role in this ongoing abuse.

In January 2019, Amnesty International released a report called Destination Occupation which exposed how the world’s leading digital tourism companies – Airbnb, Booking.com, Expedia and TripAdvisor – contribute to and profit from the maintenance, development and expansion of illegal Israeli settlements. Such activities amount to war crimes under international law.

TripAdvisor is the second-most visited website (after Google) by foreign tourists arriving in Israel, with over a quarter (more than 800,000 people) saying that they consulted the site for attractions, tours, restaurants, cafes, hotels or rental apartments before arrival.

In our campaigning, we have asked Kaufer to stop listing or promoting properties, activities and attractions located in illegal Israeli settlements in the Occupied Palestinian Territories. TripAdvisor responded by claiming that “[t] he listing of a property or business on TripAdvisor does not represent our endorsement of that establishment”. Yet the company does make a profit from listings including those in illegal Israeli settlements.

TripAdvisor and other businesses try to defend their position by claiming that the issue of illegal Israeli settlements is too political, so they cannot take a stance on it. We understand that businesses don’t have the mandate to resolve political questions, but they do have a responsibility to ensure that they do not cause harm or contribute to human rights abuses.

The human rights impact of tourism and other business operations in Palestine is perhaps difficult for the reader to envision, but it is very real for the people living under Israeli occupation. For example, we found that TripAdvisor has prominently featured, and acted as a booking agent for the City of David, a popular tourist attraction located in Silwan, a Palestinian neighbourhood in occupied East Jerusalem. The site is managed by an organisation called the Elad Foundation, which is backed by the Israeli government and works to help Israeli settlers move into the area.

Silwan is home to about 33,000 Palestinians. Several hundred settlers now live there, as well in heavily protected settlement compounds. Israel has been moving its citizens into the neighbourhood since the 1980s. This has resulted in numerous human rights violations, including the forced eviction and displacement of Palestinian residents.

In the past 10 years, at least 233 Palestinians have been displaced from Silwan. Most recently, on July 10, Israeli police and security forces evicted a Palestinian family of five, including four children, from their home in the neighbourhood.

By actively encouraging users to visit the City of David and take guided tours of the site, TripAdvisor has boosted Elad’s business and profited from every booking made through its site.

If TripAdvisor had conducted even a basic risk assessment of its business activity in or with Israeli settlements, it would have found that such listings are contributing to sustaining an illegal situation that is inherently discriminatory and abusive of the human rights of Palestinians. It is astonishing that a multibillion-dollar company (which claims to be the world’s most visited travel site, with more than 450 million unique visitors a month) has either not done such due diligence on its operations in Israel and the Occupied Palestinian Territories, or has done so but decided to continue its activities regardless.

Other digital tourism companies have also sent mixed messages on human rights. In April 2019, Airbnb announced that it would be reversing a previous decision to remove listings in illegal Israeli settlements in the occupied West Bank following a class-action lawsuit by Israeli lawyers. The company stated that it would donate the profits from these listings to “non-profit organizations dedicated to humanitarian aid that serve people in different parts of the world”.

Airbnb, like TripAdvisor, cannot continue to ignore its business with illegal Israeli settlements which goes against basic tenants of international human rights law, while trying to demonstrate concern for people in need through a corporate responsibility programme.

No amount of donations will erase the wrong they are doing in the occupied Palestinian territories and indeed, no amount of short-term profit should be worth contributing to war crimes.

‘Where is the geezer?’ Danny Dyer rages at David Cameron over Brexit