Its largest exports are precious minerals such as copper and gold, which have helped drive the country’s economic development in the last decade.

From the lush Amazon rainforest to the rocky Andes to the barren expanse of the Sechura Desert, Peru’s varied landscape hosts a wealth of natural resources.

While the number of people who live under the poverty line has halved to 20 percent of the population, many families still take desperate measures to make ends meet.

From taxiing people along narrow cliff roads to exploding ore in old mining shafts, here are the workers risking it all to make a living.

In Peru’s drylands, Carlos works in the crumbling corridors of an abandoned mine to provide for his family.

He, along with his brother, son and nephew, search for gold, which they find in small amounts in the ore; the company that once excavated there left because the mine was not profitable enough. For every five tonnes of minerals the family excavates each month they find 125g of gold.

As wooden beams crumble in the humidity and heavy pressure, and the men rely on dynamite to blast the ore, they are constantly at risk of the rock collapsing on them.

“There was an accident that killed someone when this mine was still being exploited by a consortium. I think that’s partly why they abandoned it,” explains one of the men.

They continue to work knowing that the money they make – Carlos earns almost $600 a month, which is twice the minimum wage in Peru – can help support their families and send their kids to school.

“We want to educate our children, but we can barely afford their school fees,” says Carlos. “Beyond that, we just don’t have the means. Our children are let down by the system, they are abandoned.”

Rosendro is a winemaker who drives his 20-year-old truck along the cliff faces of Cotahuasi Canyon to reach his vineyard. As one of the only locals with a car, he also works as a taxi driver, transporting people along the winding road. 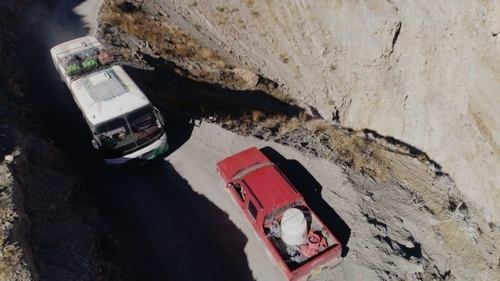 The journey is treacherous as he winds his way on a road so narrow that cars struggle to pass each other. The cliff edges crumble easily, and the valley is 3.5km deep.

“If you fall, you won’t get out of there alive,” says Rosendro, who once had to fashion a log bridge to cross a collapsed section.

He says people are used to conditions like this in the canyon, where he was born and raised. He drives carefully but confidently.

“Going slowly bores me, but the car holds up well. You’ve just got to go for it,” he says.

Chicoca is a 66-year-old fisherman who spends weeks at a time in the Paracas desert, scaling down a hard cliff edge to fish in the Pacific Ocean.

He uses a rope to lower himself and has no safety measures.

“Three people have died here,” he says. “They let go of the rope, they got cramps.”

The work takes him away from his family since he doesn’t have the means to pay for petrol to drive his motorcycle the 35km home every night.

“I’m going to stay for another 30 days before I go back home to my family so that I am able to bring back fish for my family,” he says on the trip. “This is the life of a fisherman.”

On Asia Island situated centrally along Peru’s coast, men harvest one of the best natural fertilisers in the world: guano, or bird droppings.

While they earn almost double the minimum wage, the work is back-breaking and the conditions dangerous.

The dust from digging out guano – performed with pickaxes rather than machines as to not scare away the birds or damage their habitat – is so thick that government-issued face masks are rendered useless.

The ammonia, the men say, damages their lungs, and ticks carried over by the birds also pose risks.

The workday, which begins at 5am and can include sifting pebbles and feathers from the bird droppings and carrying 50kg bags by hand, is unbearable for some. 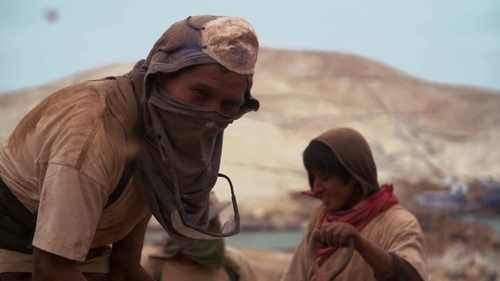 “Many men who come for the first time only stay for a month, a fortnight, sometimes just one week … they can’t cope with the work, with the smell … they crack. They’re not used to working so hard,” says one man. “The older people are the ones who last – they’re already used to working here.”

Those who do stay are housed and fed on the island and live away from their families.

“We miss our families a lot, but what can we do?” says one worker. “This job is the only way we can afford to dress and feed them. Our loved ones must understand that, even if psychologically, it’s hard.”

In Sri Lanka, Muslims say Sinhala neighbours turned against them