Kenya’s Finance Minister Henry Rotich pleaded not guilty to corruption charges, a day after his arrest over graft in a multi-million dollar project to build two dams. 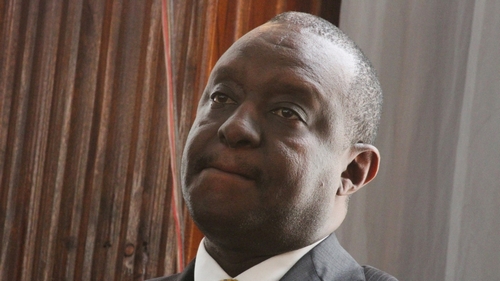 Rotich appeared in an anti-corruption court in Kenya’s capital, Nairobi, on Tuesday along with his deputy, Kamau Thugge.

Prosecutors charged him with multiple counts, including abuse of office, conspiracy to defraud the public, failure to comply with guidelines relating to procurement, and committing an offence of financial misconduct, among others.

His arrest on Monday marked the first time a sitting Kenyan government minister has been held on corruption charges.

Rotich and Thugge were released on cash bail on Tuesday and ordered to stay away from their offices for the duration of their trial.

Kenya’s chief prosecutor, Noordin Haji, has also ordered the arrest and prosecution of 27 other officials for alleged wrongdoing in the dam project overseen by the Italian construction company CMC Di Ravenna.

The two dams were budgeted to cost $450m, but the treasury had increased this amount by $164m, Haji said on Monday, a move that needlessly ratcheted up Kenya’s ballooning public debt.

The two dams, Kimwarer and Arror, are planned for Kenya’s Elgeyo Marakwet county but have not yet been built. Yet, some $180m has already been paid out, said Haji.

Another $6m was paid out for the resettlement of people living in areas that would be affected by the project, but there was no evidence of land being acquired for this, he added.

Rotich, who looked “quite subdued” during his court appearance, was “the face of Kenya in meetings with important financial institutions like the International Monetary Fund and the World Bank, as well as when it comes to sourcing international loans to fund the infrastructure megaprojects that are going on,” said Soi.

Some see Rotich’s prosecution as evidence of a growing rift between Kenyatta and Ruto.

Kenyatta appointed Rotich in 2013 at Ruto’s request. Ruto has made clear that he expects to receive the ruling coalition’s nomination for the presidency in 2022, despite objections from some in Kenyatta’s camp. Kenyatta will have served two terms and be ineligible to run again.

“This scandal has been very political,” said Soi. “We are already seeing some politicians saying that this fight against graft is really targeting people from specific communities and some of these individuals are being used as scapegoats.

“Previously, the deputy president, William Ruto himself, said the money that is said to have been lost is way lower than the figures [Haji] is giving out. But then a lot of Kenyans are saying that stolen public money is stolen public money, no matter how much it is and people need to be held to account.”

“We have the Italian individual, he has not managed to present himself so we will be seeking for his extradition to come and face the charges here in Kenya. We will also issue an international arrest warrant,” he said.

In a statement on Monday, the company said it had not been informed of “any official communication from the Kenyan authorities… CMC is certain of the correctness of the work of the company and its representatives, both in Italy and abroad”.