Tunisia’s President Beji Caid Essebsi, the North African country’s first democratically elected leader, has died at the age of 92, according to the presidency. 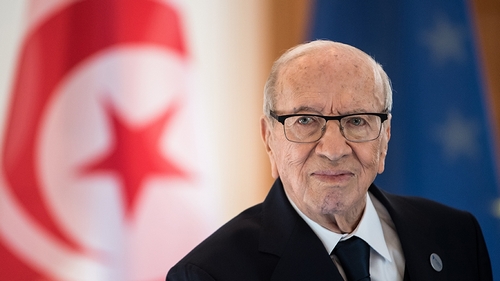 One of the world’s oldest leaders, Essebsi died at the Tunis military hospital on Thursday morning, the presidency said in a statement.

He was hospitalised with a severe illness in late June, but returned to intensive care on Thursday, his son said. Earlier, Hafedh Caid Essebsi told AFP news agency that “things are not going well”.

As prime minister, he helped draft a new democratic constitution guaranteeing fundamental rights such as freedom of speech, and preparing Tunisia for free elections.

He also cobrokered an historic power-sharing deal between his Nidaa Tounes movement and Islamist party Ennahda that helped to steady the country, as other parts of the region such as Syria, Yemen or Libya struggled with upheaval and violence.

In recognition of their role, Tunisian civil society groups won the Nobel Peace Prize in 2015.

Though Tunisia remained a democratic exception in a troubled region, critics accused Essebsi of attempting a dynastic handover to his son, rowing back on some post-revolution freedoms, and failing to support a truth commission seeking justice for the victims of authoritarian rule.

Essebsi recently announced he would not run in an election scheduled for November, saying a younger person should lead the country.

Concerns had been growing about a potential power vacuum in Tunisia ahead of the November elections after the president was hospitalised three times in recent weeks.

Tunisia’s constitution, adopted in 2014, provides two measures in such a case.

The prime minister can take over the president’s responsibilities for a period of no more than 60 days. If the vacancy is longer, the speaker of parliament is tasked with the role for up to 90 days.

Youssef Cherif, deputy director at Columbia Global Centers, said the parliament speaker, Mohamed Ennaceur, who is 85 years old, was likely to take over the country.

“The president has been unwell for almost a month now, so for the last few weeks there was a lot of discussion inside the corridors of the presidency, the parliament, the prime minister’s office to find a way without having a constitutional court,” Cherif said from Tunis.

“Constitutional experts say the parliament speaker will be the interim president for about two months, and then either elections will happen after two months, or elections that were anyway scheduled to take place between October and December will take place.”

Parliamentary elections are scheduled to take place on October 6, followed by a presidential election on November 17. They will be the third set of polls in which Tunisians have been able to vote freely following the 2011 revolution.

Commenting on Essebsi’s legacy, Sami Hamdi, editor-in-chief of the United Kingdom-based International Interest magazine said: “Tunisia is still faring far better than Libya, Syria and the like in the sense that it has avoided war. However, this is not to deny that Tunisia is going through a very bad economic crisis. There is still incredible class divides and poverty.”

Unemployment in Tunisia stands at about 15 percent, up from 12 percent in 2010, due to weak growth and low investment.

Tunisia has been spared much of the violence seen elsewhere in the Middle East since 2011, although it has been the target of fighters from the Islamic State of Iraq and the Levant (ISIL or ISIS) over the years.

“We have seen the return of lobby groups, business interests and foreign intervention,” Hamdi said. “Nevertheless there is still a belief that in 2019 all hope is not lost, that there is still some sort of democratic process.”

Nobody can deny that Tunisia is suffering from despair, he added.

“However in comparison to other countries, there is still hope that we can fix the path and go towards a more prosperous Tunisia,” he said.

“There is an admission that the people still have power.”