The Conservative MP Michael Fabricant has apologised for tweeting a cartoon image of Sadiq Khan being mounted by an inflatable pig, after he was accused of Islamophobia.

Khan, the mayor of London, called on the Tories to take action against the backbencher, and the Labour MP Wes Streeting said he had written to the Conservative chief whip, Julian Smith, asking what would be done.

The tweet, quickly deleted by Fabricant, referred to the “Trump baby” protest balloon being flown over Westminster, which Khan authorised and the Lichfield MP has criticised.

The images showed a grinning Donald Trump, and in the background a balloon pig mounting a balloon with Khan’s face on it, with the words: “Breaking news: Trump defeats Sadiq Khan in balloon wars.”

In a letter to Smith, Streeting said the use of a pig in connection with Khan, who is Muslim, was “grossly offensive, highly inappropriate and racist”, saying it echoed the anti-Islam mayoral campaign fought by the Tory candidate Zac Goldsmith.

Khan told LBC: “I would expect that if a member of a mainstream party who is an MP to have tweeted what he tweeted, his party would take action against him.”

Warsi said there should be an inquiry into Islamophobia within the Conservative party: “The problem in my party is too widespread for there not to be.”

In a tweeted apology, Fabricant said he “accidentally tweeted a vile picture” sent to him by someone he had trusted. “Because I was distracted in a meeting and saw it on a small iPhone, I didn’t spot what it really was,” he said.

“When I saw the picture, I thought it was just a funny cartoon of a flying pig doing something to the baby Trump blimp. This followed on from my remarks on TV about the hypocrisy of the anti-Trump demos and the ridiculous blimp.

“Instead, it was something quite different and very nasty. Once I realised what it was, I deleted it. All within a couple of minutes or so.”

Fabricant said he found it “particularly galling as I am a socially liberal Conservative”.

Separately, Channel 4’s FactCheck has asked Fabricant why he apparently had the flag of apartheid South Africa on the mantelpiece of his office. It appeared in the background when he was interviewed by Channel 4 News this week. 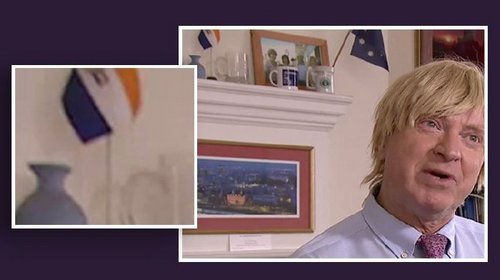 Hi @Mike_Fabricant, what is this flag on your mantelpiece? @FactCheck pic.twitter.com/kS9SKDPNGi

Colombia to grant citizenship to children of Venezuelan parents