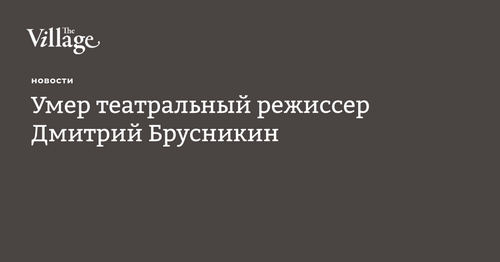 On 61-m to year of life has died actor and Director, artistic Director of Praktika theatre, Dmitry Brusnikin.

In early may Brusnikina appointed acting Director of “Practice”. Formally artistic Director of the theatre, he became on August 7, two days before death. The Director instead took Boris Mesaric.

Brusnikin had the title of honored artist of Russia. In 1982, he graduated from the school-Studio of the Moscow art theatre, and after graduation stayed to work in the theater. In 2015 his production of "the Workshop of Dmitry Brusnikina" in its entirety was adopted at the Moscow drama theatre "Man", and in 2017 — in the company of "Practice".