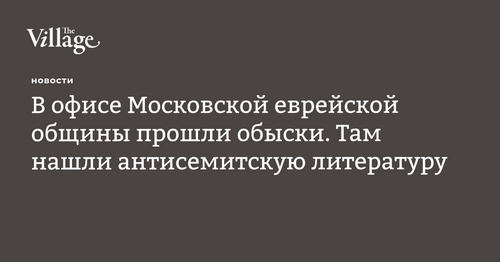 The police raided the office of the Moscow Jewish religious community on the case of extremism and found a banned anti-Semitic literature.

The staff of the Centre for combating extremism carried out a review in relation to the Russian representative of the ruling Israeli party “Likud” and the leader of the Jewish movement “Shahar” Alexander Kargin. This was reported by his lawyer Igor Zuber.

According to him, the search lasted an hour and a half. Officers seized the literature of different content, primarily nationalist and anti-Semitic. “How can there be a Jewish leader literature anti-Semitic is absurd. It is clear that this literature was planted,” said Zuber.

He explained that while any administrative or criminal case at Kargin not made, the case for protection remains unclear. Zuber also added that Kargin was summoned by police for questioning.